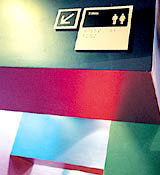 At Ocean, London’s latest live music venue, the songs are not restricted to the three stages. Instead, they permeate the artwork (one piece is inspired by the song Walk On By) and even the sign system, which is full of hidden references to famous song titles.

The Kitchen, which designed the identity and the signs using the font Helvetica Neue, was inspired by the need to incorporate Braille into signs throughout the Lottery-funded building, which aims to be fully accessible to wheelchair users and to the blind and partially-sighted.

This led to experimentation with Braille as a dot-matrix graphic device in addition to its primary role as a source of information. Real Braille (easy to understand, doesn’t use capital letters) is positioned at the base of each sign to give directional information, while above The Kitchen used Braille patterns of 25 song titles. Highlights include Loaded (by Primal Scream) for the loading bay, Message in a Bottle (by The Police) for the bar, Return of the Mack (by Mark Morrison) for the cloakrooms, and for the disabled toilets, Spasticus Autisticus (by Ian Drury – a title suggested by Ocean itself). ‘We thought “Oh, let’s have a bit of fun” and [Ocean executive director] Mark Higham loved it because it was a music-led innovative signage system,’ says The Kitchen’s creative director Rob Petrie.

‘The larger pattern looks like a digital dot-matrix and we employed it as a graphic device even though there’s a hidden message,’ he adds. While it is essentially an in-joke, designers hope the graphic Braille might be understood by some of the partially sighted visitors to the venue ‘so people will realise there are hidden song titles in and around the venue’, says Petrie.

For the signs, The Kitchen specified the enamelled metal system, Infinite by Modulex, which was screen-printed with the dot pattern and the words above the real Braille. There are 120 signs in Ocean, including those in the dressing and warm-up rooms, with appropriate backstage song titles.

The main sign directory is positioned at the entrance and it incorporates the green ‘wave’ identity, devised by The Kitchen. It also shows the seven different areas in the venue and the colour-codes used in the signs for each of these. Dark blue, blood-red and burgundy for the three venues; metallic bronze and silver for the Rising Tides training and rehearsal centre and the mezzanine; blue for the ground-floor Aqua cafÃ© bar; and gun-metal grey for the balcony bar. The wave symbol, also found in the huge swinging entrance door, is used again in silhouette as a graphic sign-off within the signs, at the entrances to the three auditoriums.