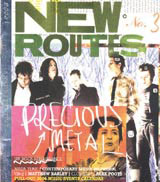 New Routes, the music magazine produced by the British Council’s Performing Arts Department, has been redesigned by Tomorrow London.

Tomorrow won a four-way pitch last September for the four-figure relaunch brief, as the title switches from an annual to a bi-annual publishing schedule. New Routes promotes the work of UK bands and the British music industry around the world, and was launched in 2000 with a design by Swifty.

Deliberately radical in appearance, the magazine is ‘designed to reflect an image of the British Council that is fun, forward-thinking, sometimes irreverent and always informed’, explains incoming New Routes editor John Daniel. Tomorrow London director Steve Flanagan explains that the design evokes the ‘craft-based ethos of the industry’ with a ‘very organic feel’.

‘It uses uniquely British iconography and makes reference to the old British schoolbook with its multi-layered wallpaper effect,’ says Flanagan.

‘For the British Council this was about breaking with convention, which seemed appropriate for an industry that is about doing just that,’ says Daniel, who wonders if the redesign might even spark a general rethink of the department’s general style of print.

The magazine is distributed throughout 110 countries. It is free of charge and sent via the council’s network of international offices to music promoters, producers, festival directors, media arts support organisations and agents, as well as policy-makers.

PDF files of articles in the magazine are available to download from www.britishcouncil.org/arts/ newroutes.