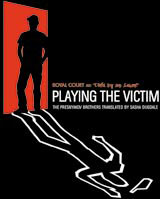 Martin Brown has created a series of images for the Royal Court’s production of Playing the Victim, which opens at the Edinburgh Fringe in August. Brown’s illustrations will be applied across posters, leaflets and the jacket of the play’s script. A series of the murder scene silhouettes are also planned for the foyer of the Royal Court. Written by the Russian Presnyakov brothers, the script is the story of a man whose occupation is to play the victim in crime reconstructions. Brown says his work is ‘tongue in cheek’ with a ‘dark humour’. ‘The character leads a double life and the work suggests this ambiguous image,’ he adds.