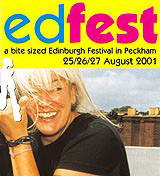 Some of the UK’s top comedy performers are taking part in the inaugural Edfest, a ‘bite-sized Edinburgh Festival’ in South London’s Peckham, with publicity material designed by Tentacle.

Paul Merton, Neil Morrissey, Tony Hawks and Arthur Smith are just a few comedians lending their support to Edfest, which runs from 25-27 August.

Tentacle has created a concertina-style programme that opens into a poster, featuring photography by James Corbett, who was recommended to the consultancy by Southwark Council, says Tentacle director Wendy Doughty. The programme will be published in the next few days.

According to Doughty, ‘The idea was to make the performers appear lost, as if they were trying to get to Edinburgh but ended up in Peckham.’

The Edfest action kicks off each day at around 2pm and will take place at a specially erected, 350-seater big top tent on East Dulwich’s Goose Green and at comedy club Upstairs @ EDT.

As well as comedy, Edfest will incorporate live dance, theatre, readings, a book festival and a bigscreen showing of cult film Withnail and I. Live music will range from gospel to street jazz, actor Art Malik will be hosting a mini film festival and comedian Stephen Frost will be taking part in a synchronised swimming event.

Festival organiser Terry Smith says he hopes the Edfest will become an annual event. ‘We are aiming to attract kids as well as adults to the festival,’ he adds. Smith is organising Edfest alongside colleague Janet Prince.

Tentacle was appointed on the strength of a recommendation from Southwark’s Bellenden Renewal Group, which is sponsoring the event.

Romantic designers must suffer for our art