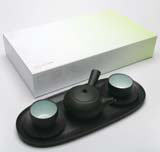 Hakkasan founder Alan Yau is looking at ways to evolve his Soho eatery and tea house Yauatcha from a restaurant to a luxury retail concept, working with product designer Shin Azumi and graphic design consultancy Made Thought.

The moves come ahead of plans to open additional Yauatcha venues in London, as well as to expand the brand internationally, in Asia and the Middle East. It is likely that new London sites will take either the tea house or dim sum elements of the restaurant, rather than both, says Hakkasan head of project development Haruo Morishima.

Azumi’s tea set design is the first in a range of products being developed for the brand. These designs and other Yauatcha products will feature packaging and graphics by Made Thought, which move away from the original visual style created by North Design at the time of the restaurant’s launch in 2004 (DW 19 February 2004).

According to Morishima, Made Thought’s designs present a less ‘male’ look than North’s work, bringing the visual identity more in line with the Christian Liaigre-designed interior space at the restaurant. The logotype has been ‘completely redrawn’ and richer graphic patterns and colour are now placed on the inside of packaging, to ‘heighten the sense of discovery and surprise’, says Made Thought creative director Ben Parker.

‘With the brand evolving from restaurant to luxury retail concept, the graphics that had worked for the restaurant identity now seemed inappropriate for this new direction,’ says Parker. ‘North’s ‘spirited’ identity was in conflict with the more sophisticated ambitions Yau now has for the brand and he felt that it detracted from the product.’

Azumi’s tea set and forthcoming products will retail from the restaurant, but other retail distribution may be established in the future, says a Hakkasan spokeswoman.

ON THE MENU AT HAKKASAN:

• Hakkasan restaurants likely to open internationally, but no more in London

• Chowbar project on hold as other ventures are explored

• Alan Yau’s club and restaurant scheme, by Future Systems for Battersea Power Station, yet to be fully agreed with developers (DW 23 June 2005)