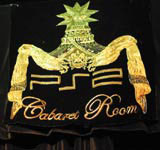 Restaurant Bistrotheque in London’s East End has completed the revamp of its adjacent Cabaret Room, sponsored by PlayStation 2 and designed by Checkland Kindleysides. The venue, which specialises in transvestite revues, was designed according to a brief which asked for a ‘Moulin Rouge-meets-Brick Lane’ theme.

Bistrotheque opened last year in a three-storey converted clothing factory in London’s Hackney, and Pablo Flack, co-owner and former House Of Jazz fashion designer, says the thinking behind the design of all the rooms has been to embrace the fact that the site is ‘an old sweatshop down a backstreet’.

‘[The Cabaret Room] was a shell, we didn’t know what to do with it,’ says Flack. ‘We had a tranny lip-synching competition and it really lent itself to having a stage in there.’

The association with PlayStation 2 and Checkland Kindleysides came about after Bistrotheque contacted Sony seeking sponsorship, inspired by a love of PlayStation’s SingStar game.

‘You don’t get many drag queens playing PlayStation and this broadens things out for them,’ says Flack. ‘It is no longer [just] nerdy boys in their bedrooms.’

Along with its low lighting, velvet banquettes and curtains bearing a PS2 crest, the room is distinguished by a PS2-stencilled gold mirror and rows of Victorian bell jars containing stuffed animals (which will eventually be branded). The mirror, crest and jars were all built by Checkland Kindleysides, as was a custom SingStar unit in gold casing.

‘We did a lot of research into old cabaret rooms, looking for vaudeville-era luxury, but with humour as well,’ says Wendy Ingham, account director at Checkland Kindleysides.

One nation under a groove