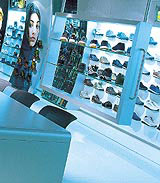 “Caterpillar’s brief was to create a new showroom in an area of 76m2 at its Britton Street headquarters in Clerkenwell, central London. At the moment it’s a distributor but it has recently branched out into formal, leisure and workwear in competition with [brands such as] Timberland, so it’s looking to open a flagship store in January next year. People think of Caterpillar as a heavy duty workwear brand, but the marketing team are trying to get away from that.

“Caterpillar moved into the showroom at the end of last year, so it’s only been working properly since January. The company wanted a new showroom that incorporated a lot of retail ideas, not just the usual ‘stack and rack’ sort of thing, with ideas they could eventually take on and put into their flagship store. It wanted something fresh, so that when buyers came into the showroom they’d say: ‘We like the products, but what about that display unit? We like that, too’.

“We wanted to give them a refined industrial edge, using materials such as aluminum, but in a subtle way, combined with limestone flooring, which has a much softer image.

“The interior had to be quite modular because Caterpillar wanted to change it frequently; it had to be as flexible as possible, to display 700 different styles of shoe in the space, as well as the clothing range.

“We’ve based the whole system on a modular panel system; the idea is that the panels have slip-in rods which hold shoes or clothing. The whole idea is flexibility, so there are a lot of movable units like sliding footwear displays, hung from the ceiling.

“The effect is very clean lines with a lot of large scale graphics on movable panels; the client has an ad campaign which is updated three or four times a year, so we have used the images and visuals from that, which tie in with each collection. They’re magnetically mounted, so they can be changed whenever they want.

“Feedback, so far, has been very good. There’s already been a lot of response from the buyers that come into the showroom. We certainly hope it has put us in good stead for looking at Caterpillar’s retail concepts.”

“In terms of the showroom, it’s a showcase piece, it’s allowed the integration of all products: footwear, workwear and accessories into one environment.

“It’s a very good-looking environment for the company. Our major accounts come into the showroom and can see the extent of the range and the merchandising, as well as the marketing campaign. It really is a showpiece for the brand, but it’s used as a selling tool because it’s our head office.

“We are very pleased with the working relationship we’ve had with Cobalt, and with the finished result.”

ITSU joins up with Grupo Sigla