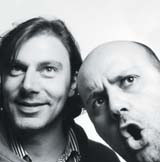 The work of M/M (Paris) can broadly be described as graphic design, yet it crosses boundaries and attracts superstar clients. The French duo tell Richard Clayton about the benefits of design over art.

Apart from saying the pair are French creatives, defining M/M (Paris) is not easy. Working together since 1992, Mathias Augustyniak and Michael Amzalag have art directed both French Vogue and fashion shoots for Calvin Klein, produced promos for Björk and packaging for Stella McCartney, and kitted out a trendy café – Etienne Marcel – with Joe Colombo-ish interiors clobber. After all that, M/M could call itself anything it likes, especially now that galleries are selling its wares as objets d’art. When pushed, however, ‘graphic designers’ it is. Let’s just add ‘sans frontières’.

‘Our work always contains traces of other projects, and links with other people,’ Amzalag explains, before the opening of M/M’s current show, at the Haunch of Venison gallery, in London’s West End. ‘For us, collaboration with artists such as Pierre Huyghe and Philippe Parreno, or the photographers Inez van Lamsweerde and Vinoodh Matadin, is interesting – not in a hippy, democratic sense, but more as a conversation.’

Augustyniak has previously described graphic design as ‘the intersection of a multitude of information networks’, but he is still en route as I start speaking to Amzalag. That’s a stroke of luck, because, when Augustyniak arrives, he seems the natural frontman, while Amzalag is the quiet one. 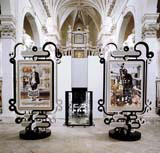 Despite international acclaim, it took ages for M/M to gain domestic acceptance. Lately, the duo has gone ‘from being hidden monsters to godfathers of the younger generation’, Amazalag observes, unmoved by the adulation. Technique in France is hung up on ‘legibility and neutrality – like the Swiss’, he says. ‘But, however transparent you’re being, you’re always filtering the content. So we are conscious of being filters, and load our work with extra meaning. Our shapes exceed their original designs – that’s why they’ve attracted art-world attention.’

Mischievous, exuberant and self-reflexive, the items at Haunch of Venison include screen-printed mirrors that the viewer must approach on the sly; strange, voodoo-like speakers – part fungus, part totem – hanging from the ceiling; and framed ‘portraits’ that use words, rather than pictures, to convey their sitters (Kate Moss among them). These pieces all echo earlier M/M commissions: a V Magazine spread on new faces in modelling; a necklace designed for Björk’s Medulla album; and a spidery joined-up font, first created for another of her records, Vespertine.

Choosing to be designers, as opposed to artists, offers ‘economic independence’ and a ‘social position’, says Augustyniak, taking the initiative. Clients provide discipline and focus. Yet buying the services of M/M – much like buying those of the duo’s hero, Peter Saville – means buying into a particular aesthetic. ‘We see all this different media space as our enlarged workshop,’ Augustyniak adds. ‘Each project becomes a platform of experiments, with its own set of constraints.’

M/M brings illustrative depth to fashion photography, but surface effects are only half the story. ‘We don’t believe in the fetishism of the one-off object,’ Augustyniak asserts – which partly accounts for a further iteration of the V magazine series that references the Pi, a symbol of infinity. Also exhibited nearby is a sequence of ‘cover versions’ of titles by artist Liam Gillick. And the musical process of ‘sampling’ is the metaphor both members of M/M reach for when describing their consultancy. Yet the material M/M most frequently samples is the group’s own output. 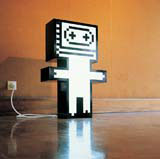 Sleeve designs for Madonna (American Life), Robbie Williams (Radio) and fast-rising rock band Mew are ‘like breathing spaces’, says Augustyniak: that is, a break from the business of being Björk’s visual ‘narrator’ or creating ‘mythologies’ for labels including Balenciaga, Jil Sander and Yohji Yamamoto. New work for McCartney is due in the autumn, when M/M also figures in Paris Calling, a London expo of contemporary French art.

Pondering which double act M/M most resemble – and worried that comedians won’t cross the cultural channel – I suggest they draw a pop comparison. ‘Ah,’ Amzalag exclaims. ‘Paul [Neale] from Graphic Thought Facility once said Bryan Ferry and Brian Eno!’ So who is who? ‘Oophf,’ he shrugs, theatrically. ‘You’d have to ask him.’ Okay, I’ve made my guess – over to you, Mr Neale. Answer on a carte postale?

Asda reviews roster as it expands across all formats