Gladys Perint Palmer says her award-winning career in fashion illustration began by accident. As a student at what is now Central Saint Martins in the late 1960s, two weeks before the end of her foundation year, she opted to study illustration when classes resumed in the new academic year. Then she all but forgot about it.

“It was a glorious summer – we went to the beach and none of us did a stroke of work,” she recalls. Despite a relaxed attitude to filling sketchbooks that summer, Palmer has routinely been labelled one of the world’s most talked-about fashion illustrators. In 1998, Phaidon’s The Fashion Book named her as one of the 500 most influential people in fashion since 1860.

Now her work is being shown at GrayMCA’s Drawing on Style illustration exhibition in Cromwell Place. 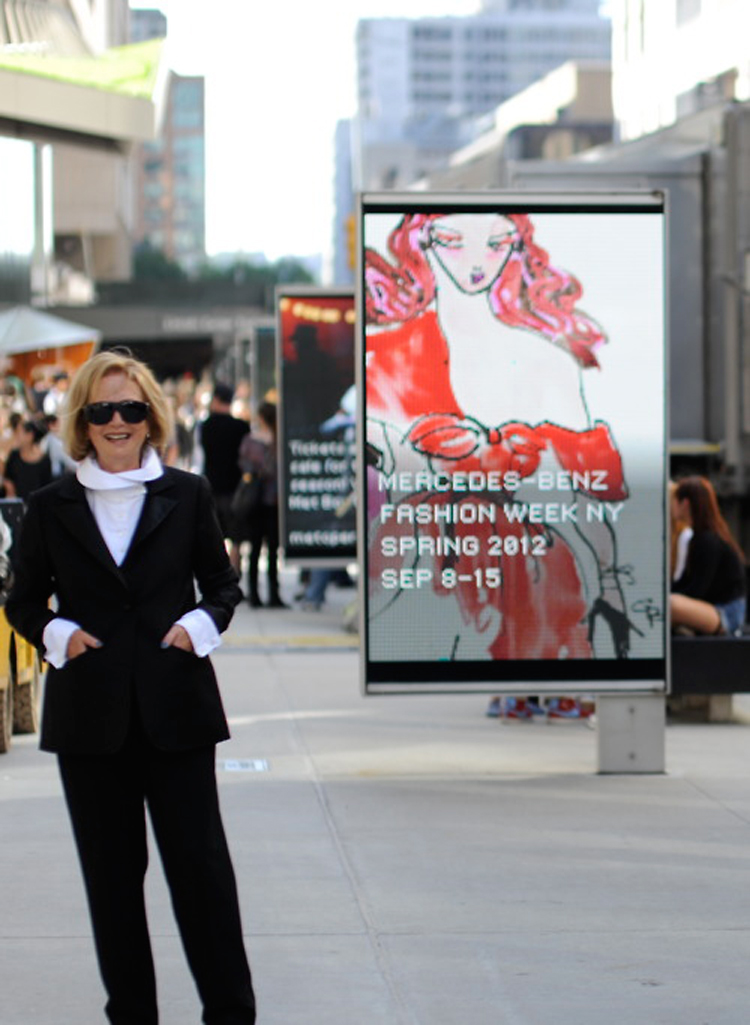 Born in Hungary in 1947 and raised in the UK, Palmer left London in 1967 for the US as a graduate to pursue studies in Fashion Illustration at Parsons School of Design in New York. By the time she graduated in again in 1968, she was already working for coveted fashion magazines like Harper’s Bazaar and Vogue.

Even in these early days Palmer insists she never found working in the industry competitive. Despite being one of very few women working in haute couture at the time, she says she never felt out of place as a woman working in fashion, since “most of the men were gay and we were all friends”.

Even with few women around her, Palmer lists a handful who influenced her career immeasurably. At university she was introduced to two mentors. The first was Muriel Pemberton, the woman who “invented fashion education”, Palmer says. The second was Elizabeth Suter, who taught her what she needed to know about drawing bodies.

Along with Suter and Pemberton, Palmer credits her international career to Italian Vogue editor Anna Piaggi. The two had a working relationship starting in 1989 and continuing until Piaggi’s death in 2012. Meanwhile she thanks Connie Gray of GrayMCA for her current career, which these days includes virtual Masterclasses and exhibitions alongside client work.

Beyond Vogue and Harper’s Bazaar, Palmer’s work has also appeared in the New Yorker, the Los Angeles Times, the Sunday Times, as well as the San Francisco Examiner, of which she was fashion editor for five years. She’s also worked for fashion houses like Oscar de la Renta, Dior, Valentino, Galliano and Chanel.

Illustrating for magazines and designers both have their merits, Palmer says, but for different reasons. When it comes to drawing for fashion houses, she says her preference lies in the avant-garde. “I loved drawing for John Galliano, Jean Paul Gaultier and Vivienne Westwood,” she says. “Designers with practical, wearable clothes are less interesting – how many ways can one draw a blazer?”

As for magazines, she says the best are those with good art directors. “I always submitted more drawings than were needed so the art director could choose,” she recalls. The sign of a good art director was actually making that choice. “[Good art directors] selected a few drawings to work with the page – whereas others would cram all the drawings I sent into a small space,” she says. The latter always produced “less pleasing” results.

Crafting her own techniques

High-profile clients haven’t influenced Palmer’s work so much as art supplies and techniques have. Palmer has tried several mediums to craft her illustration, has invented some of her own, and can chart her career based on these.

Like many illustrators, she started off with soft pencils and charcoal while studying at Central Saint Martins. At Parsons, she recalls inventing a technique that involved soaking paper in paint thinner and drawing into this with pencils and water-soluble crayons. Seeking out these new techniques was largely because she disliked ink and markers earlier on in her career.

“Most recently, I discovered the fun of drawing with an eagle feather and the dropper of a Liquitex acrylic ink bottle, and I’ve also started adding texture with dried up markers,” she says.

Alongside creative techniques, Palmer credits simple digital innovation which many designers benefit from like Zoom and WeTransfer as supporting her present career. This is how she is able to continue working internationally while living in British Columbia, Canada. “They have transformed the process of my work,” she says.

Whatever method she uses, Palmer says she does not do rough sketching. When she does, the finished product “rarely even resembles any rough drawing,” she says. “I draw until I’m satisfied and then I’m finished.”

On her creative process, Palmer likens it to an “energy that starts in my shoulder and runs down my arm to my right hand”. On a good day – when the energy “flows” well – drawings work well. On a bad day, she compares it to “an overflow of rubbish”.

For those wishing to follow in Palmer’s footsteps, she says continued drawing is essential. “It’s a lifelong pleasure and occupation, and life drawing, perspective, colour and silhouettes are essential studies,” she says. “They cannot be rushed.”

Palmer says anyone who promises to teach drawing skills in a matter of weeks should be avoided. “If in doubt, look at their drawings of hands,” she warns. “Most illustrators cannot draw hands.”

Gladys Perint Palmer’s work is being shown at Drawing on Style at the GrayMCA gallery in London, before heading to Bath. For more information, head to the GrayMCA website.