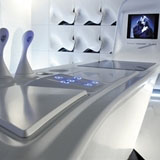 Living, as we do, in an era of rapid technological change, it’s easy to become complacent about the design developments that surround us in our daily lives – just 15 years ago, mobile phones, desk top computers and the Internet were nigh on unknown.

Yet there are some elements of product design that have remained virtually static for decades. While much of the everyday has been revolutionised, the form and function of appliances like washing machines, fridges and even microwave ovens have remained practically identical since the 1970s.

At last week’s annual furniture fair in Milan, several kitchen and appliance manufacturers unveiled their latest products. But, yet again, there was a lack of any real design development on show.

Electrolux announced its ‘official move into thoughtful design innovation’ by launching a range of non-white appliances, to ‘meet consumer demand for more individuality in the home’.

Even Zaha Hadid Architects’ Z.Island concept kitchen for DuPont Corian – a symphony of fluid curves that includes multimedia equipment to surf the Internet and listen to music via a touch-control panel – remains, at its heart, wedded to the Bauhaus concept of fitted kitchen design.

Product designers acknowledge the issue. Priestman Goode creative director Chris Parker says products ‘haven’t moved on’. ‘There’s a feeling that people have almost forgotten about [appliances]. They’re a grudge purchase and there’s not much sexiness in [designing] them,’ he admits.

Even James Dyson, whose company is credited with some of the greatest innovation within the sector, says design enhancements have been all about ‘evolution not revolution’, with some sectors, such as washing machines, ‘not evolving all that much’.

Whirlpool director of global consumer design Alessandro Finetto concedes there have been ‘no major changes to appliances or the physical layout of the kitchen’ over the past 30 years and believes product designers aren’t thinking broadly enough about their roles.

‘Designers should think about lifestyles, not just about designing [appliances] for kitchens,’ he maintains.

Finetto believes a focus on technology, rather than lifestyle issues, has hampered real innovation in the sector.

‘I personally don’t think that technology can drive innovation – there needs to be an idea behind it. I don’t think voice-responsive machinery and home networking is the future,’ he says. ‘Design enhancements should focus on the process and context of use – the where, when and how people are using a space and the links with other objects.’ 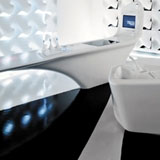 On the basis of this principle, Finetto and his team launched a series of concept products in Milan. Among them is the Laundry Wall – a washing machine designed to be part of a wardrobe unit. The machine comes complete with integral laundry bins – whites, coloureds, delicates – which, when full, drop automatically into the machine and are washed on the appropriate programme, automatically selected. On completion, clothes drop into a drying drawer beneath the machine, concluding the cycle with limited human intervention.

The company’s Living Cube concept – a coffee table with facilities to keep food warm and cold – also reflects some thought on changing lifestyles. Many of us eat and drink in front of the TV, away from our dining tables.

But, while these may be interesting ideas, they are also still concepts some way away from manufacture. And, like it or not, lifestyles are changing. Just one report from market analyst Datamonitor released last month reveals that British consumers are rapidly altering the way they eat, where they eat and when they eat.

‘Eating habits are evolving to meet the pace and structure of daily life. Consumers are missing meals, changing the times at which they eat and even changing what they eat,’ says Datamonitor consumer markets analyst Matthew Adams, author of the report.

And yet our kitchens and appliances seem destined not to reflect these social changes. It’s difficult to know why.

Dyson believes that socio-economic trends, particularly the move towards smaller homes and single person households, will eventually drive innovation. ‘Lots of people live, eat and sleep in the same room and that type of life is very much part of the future. It’s inevitable that [manufacturers] will have to respond,’ he says.

The company is working on a range of products aimed at a ‘smaller household’ and Dyson says launches are planned ‘over the next few years’.

Parker makes another observation. ‘There’s loads that could be done,’ he says. ‘But, to get a breakthrough, we need to think about the whole process and it will take balls for someone to come up with something fundamentally different.’

Perhaps it is balls that are at the heart of the issue. In an industry that is largely male, could it be that domestic concerns are still perceived as strictly a feminine province?

Life on the move

• Expect initatives like Breakfast Clubs to evolve in the future, as people spend less time at home

• 5.2 billion extra breakfasts, lunches, evening meals and snacks in Britain will be consumed outside the home in 2010, compared with 2005