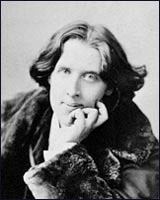 Oscar Wilde’s remark, “I find it harder and harder every day to live up to my blue china”, was immortalised in a George du Maurier cartoon in Punch, and came to define his stance vis-Ã -vis the Aesthetic Movement. This witty, larger-than-life personality, who dressed unconventionally and was never out of the personal press, established a reputation as an aesthete during his days at Oxford.

Taking his ideas from lectures by the critic and writer John Ruskin and his successor, Walter Pater, who preached the love of Art for Art’s sake, Wilde filled his rooms with blue and white china and reproductions of paintings by Dante Gabriel Rossetti and Edward Burne-Jones, declaring that beauty was the ideal after which everyone should strive.

On the centenary of Wilde’s death, the Geffrye Museum’s fascinating exhibition The House Beautiful – Oscar Wilde and the Aesthetic Interior, analyses his relationship to the movement and attempts to decode the notion of the “House Beautiful” in the context of the middle class urban home. As the Geffrye’s director, David Dewing, says: “Without Wilde, the Aesthetic Movement would most certainly have happened, but it wouldn’t have become such a wide, broadly popular one. He spread the word, because he wanted to help people bring beauty into their lives.”

The exhibition is compact, occupying just one room in the basement of the museum, and is easily visited in an hour or so. Against a backdrop of sunflower yellow – appropriate, as this was one of the cult flowers of the movement – the Aesthetic Interior is broken down into its essential elements: the walls, ceilings and floors; fireplaces, furniture and textiles.

The influences shown here reveal a true melting pot of cultures and decorative styles: Moorish, Islamic, Japanese, Chinese and medieval, in the stylised William Morris wallpapers and textiles, which were huge favourites among the aesthetes. For the 21st century visitor, all this makes for a highly charged interior.

But, put in the context of the late 19th century, when typical Victorian drawing rooms were filled to bursting with frothy, over embellished pieces – debased interpretations of 18th century French Rococo designs – it must have appeared revolutionary, or even minimalist.

One of the centrepieces of the exhibition, for example, is a superb Japanese-inspired sideboard by the architect Edward Godwin. This would have been a highly exclusive piece, way beyond the budget of the middle classes, but it serves to demonstrate the aesthetes’ vision of the way forward for design: simpler, purer forms that are beautiful in themselves. The vogue for this new style of furniture was filtered down to the middle classes by outlets such as Shoolbred, Whiteley and Liberty.

The exhibition also displays some of the decorative manuals of the day, which were designed to educate the middle classes on how to create a cohesive, harmonious, decorative scheme in the artistic style. Artistic Homes or How to Furnish with Taste, printed in 1881, may seem seriously patronising today, but as Dewing comments, “the middle classes had little formal training and were probably grateful for such purposeful advice”. And at only shilling a copy, the book’s influences could be far-reaching.

The back wall of the exhibition is devoted to Wilde’s involvement with the Aesthetic Movement. Sadly, only detailed descriptions remain of his London home in Tite Street, Chelsea, which he took in 1884 after his marriage to Constance, and commissioned Godwin to decorate. The playwright’s bankruptcy and ruin after his notorious affair with Lord Alfred Douglas led to all these furnishings being sold – and his death in 1900 hastened the demise of the movement.

But Wilde’s extraordinary wit was with him until the end. On his deathbed in a Paris hotel, he commented: “My wallpaper and I are fighting a duel to the death. One or other of us has to go”.

Thornley gets face in frame