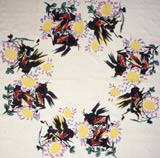 Dominic Lutyens visits Artists’ Textiles in Britain 1945-1970, an exhibition of fabric designs by luminaries such as Pablo Picasso and Henri Matisse

Writing, in 1946, about the first textiles designed by artists in postwar Britain, Nikolaus Pevsner was confident these would prove a hit, on the grounds that, ‘Art in the past 20 or 30 years has moved away from narrow representational concerns. Problems of pure form and colour, that is of pattern, are now the chief content of art.’ Given his utter conviction, the question heading his article – Can Painters Design Fabrics? – was clearly rhetorical.

If Pevsner’s prophetic analysis of this trend was based purely on aesthetics, the artists were also spurred by a desire, postwar, to create a more democratic, informal society, and an endorsement of the applied arts was a powerful way to effect this. Pevsner was right that the early 20th century paved the way. Raoul Dufy – painter of deliciously frivolous watercolours – designed fabrics then for Paul Poiret, the ground-breaking couturier who dispensed with constricting underclothes. Inspired, too, by the Bloomsbury artists’ applied arts for the Omega Workshops, avant-garde artists increasingly crossed over into textiles without feeling they were stooping to facile decoration.

The show has been co-curated by Geoffrey Rayner and Richard Chamberlain of London’s Target Gallery, in collaboration with Annamarie Stapleton of the Fine Arts Society. Their motivation? ‘Artists’ textiles are a part of their oeuvre, but aren’t widely known about,’ says Rayner. ‘We’re only showing textiles that were produced by British manufacturers and originally retailed to the public.’

A huge influence on the trend was the 1940s Victoria & Albert Museum exhibition Britain Can Make It, which showcased fabrics by Sutherland. Thereafter, go-ahead manufacturers such as Edinburgh Weavers, Horrockses Fashions and David Whitehead, and pioneering husband-and-wife teams Zika and Linda Ascher and Hans and Elsbeth Judah, commissioned artists to express themselves in fabric form, often in the ultra-disciplined, square format of that mandatory postwar accessory, the headscarf.

Some artists simply translated their pet motifs on to fabric – take Matisse’s odalisques on screen-printed silk. It’s hard to tell whether he was totally relaxed about treating fabric as an alternative canvas, or plain lazy.

With the advent of conceptual art in the 1970s, and its loftier intellectual aims, artists

‘ textiles went into sharp decline. But, in their heyday, they were impeccably populist. As Rayner puts it, they were ‘art for windows and walls; art for your back’.