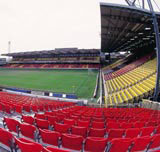 As Watford Football Club prepares to compete in its first FA Cup semi final for 16 years, Hannah Booth speaks to the director of marketing Ed Coan

Every afternoon at 4pm, a crack creative team gets together at Watford Football Club to discuss the FA Cup semi-final. Just in case you didn’t know, Watford are eyeing a place in the final along with Southampton, Sheffield United, Chelsea and Arsenal. In money-spinning, marketing and brand building terms, there’s nothing like

it in the football world and Watford are milking it for all it’s worth.

The best, or possibly worst, thing about the FA Cup is you can’t plan for it. ‘If someone had told me to put the cup final in my diary, I’d have told them where to go,’ says Watford director of marketing Ed Coan, a passionate, articulate ex-Chelsea supporter.

The purse controllers at the club are delighted. Watford desperately needs funds and Coan is looking to create as big a buzz as possible around 13 April, when Watford meet Southampton.

‘We punch above our weight, we’re different. Like Norwich or Ipswich, we represent a defined area – a town – and the club has a bit of cachet that gives Watford an edge,’ he says. Town councillors may beg to differ, but if you’ve been to Watford lately, you might agree.

Watford’s brand identity helps. Its visual impact is a godsend to newspaper picture editors looking to lift a page. The badge itself is more problematic. Created in 1977 by an unknown designer, it points down, which makes it impossible to use anywhere but the top of a page and has negative emotional connotations, Coan says.

The hart head is popular, but Coan is trying to decide whether a hornet – Watford’s nickname from its yellow and black colours – would resonate more strongly with fans. Indeed, an unsophisticated hornet was used in the 1970s as Watford’s badge. To this end, he has had an exploratory meeting with Design Bridge and has researched how other sport clubs with ‘hornet’ in their name use it as a graphic device and overcome negative perceptions of a ‘nasty, stinging insect’.

The New Orleans Hornets, a US basketball team, use an over-cuddly icon, Hugo the Hornet, and Formula One team Jordan use a ‘Buzzin Hornet’ that is too aggressive for Watford’s family supporters, he says. Neither have offered much inspiration.

The answer, he believes, is to create as typographically strong a hornet as possible and perhaps use the existing badge as a sub-brand. But he’s in no hurry. As any designer involved with clubs will testify, revamping a football badge is not easy. As brands, they inspire fierce propriety among fans who must be consulted about any changes, he says.

Coan has a highly-tuned visual awareness. With freelance designer Andy Simmons, he has set a template for all graphic work and tuts at the Times New Roman signage still up round the ground; he introduced Meta across the board in 2001. Last year, he published a book charting the visual history of the club, with the uninspired title From Team Shirts to Ticket Stubs, written by graphic designer and fan Nick Davidson.

Like Taylor, Coan has worked twice for Watford. His latest stint kicked off full-time in July 2001, which gave him a year’s overlap with Taylor’s second spell as manager for which he was grateful. ‘Watford had to be resilient to [Taylor’s] leaving, which it wasn’t the first time round. Now, we’re strong enough to weather whatever comes our way.’

Coan’s role combines managing the identity of the club and generating funds. He has just launched a campaign to raise £3m to buy back the freehold of the Vicarage Road stadium, an emotive fundraiser complete with a Let’s Buy Back the Vic stamp designed to tug at fans’ purse-strings. And he’s trying to increase season ticket numbers, Watford’s biggest revenue generator.

‘We had 5139 season ticket holders just before we were promoted to the Premiership, and jumped to 12 200 the following season. We’re now at 8200, but should be in five-figures, like Charlton’ he says. That compares with 20 000 for Arsenal.

But with a smaller club, the highs are higher and the lows – often the norm – are not as low, Coan says. ‘It’s emotionally healthier to support clubs like Watford, particularly for children. Look at Manchester United, they win everything. As a life lesson, that ain’t right.’

More than most well-known brands, a football club is regularly subject to unknown forces. Among the surprise good times of FA Cup semi-finals are the inevitable losing runs and relegations. Does the ‘brand’ suffer with every defeat?

‘I have no control over what happens on the pitch, but I can protect against poor scores,’ says Coan. ‘My job is to make the good times better, and the bad not as bad. A club is a leitmotif for the way its fans feel.’ Hence the 4pm meetings. Come 13 April, there’ll be commemorative mugs, T-shirts and warm-up guys. And hopefully a place in the final.

Before 1984 Working as a copywriter, journalist and PR in South Africa

Brand identity and packaging for Extreme