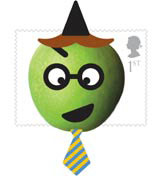 Johnson Banks presents an alternative way of getting the recommended five portions of fruit and veg a day with its new stamps for Royal Mail. We sneek a peek

‘The idea of interactive stamps started four or five years ago when Johnson Banks presented ideas to Royal Mail within the old greeting stamps format, which consists of a book of ten stamps on the left and 20 mini stamps on the right,’ says Michael Johnson at Johnson Banks.

The Royal Mail has a well documented legacy of patronising some of Britain’s best design talent, but, surprisingly, Johnson Banks had only produced one set of stamps before.

Those ideas were at the time shelved, but formed the basis of a re-brief a year and a half ago. The brief remained the same – to investigate how stamps could become more interactive, and more fun and attractive to children.

‘One of the ideas we presented won through – the idea of making up faces from fruit, vegetables and cut-out stickers – a sort of bizarre composite of fuzzy felt, children’s stickers and Mr Potato Head.

‘The idea has been through many rounds of research, since the client was a bit nervous about what people will do with the stickers when given carte blanche to plaster them on their letters, but they have sailed through all hurdles so far,’ says Johnson.

So what next for Johnson Banks? ‘The follow-up ideas – which we have designed – will wait to see how the general public respond before the next “interactive” release (probably in 2005),’ says Johnson. In the meantime we can foresee Saddam Hussein as a brussels sprout head becoming a collectible item.

The stamps will be on sale from 25 March, in both Post Offices and in 400 Sainsbury’s stores nationwide. The designers who worked on the project were Michael Johnson, Sarah Fullerton and Andrew Ross, with the fruit and veg photography shot by Kevin Summers