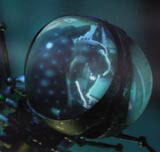 The BBC post-production 3D design and digital effects team has created the computer graphics and effects sequences for National Geographic’s documentary Secret Weapons. The programme is set in the future and uses CGI, macro photography and natural history footage to show how military design seeks inspiration from nature. The BBC team created Robobug (pictured) a computer generated robotic insect used in a reconstruction to illustrate the uses of ‘Robobug’ technology. The group examined the movements of real insects to achieve a balance between mechanical design and insect-like characteristics, according to a spokesman. Secret Weapons was broadcast in the US this week and worldwide distribution is planned.