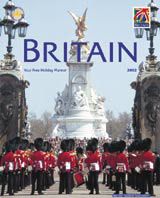 Such semiotic considerations have preoccupied the organiser of London’s 2012 Olympic bid lately. And while the process of selecting a logo has caused an almighty stink among designers, the decision – for better or worse – has now been taken. Aside from its alleged shortcomings though, the whole saga behind the bid raises some bigger questions about how London should be represented.

It’s become a sort of truism in tourist authority circles that cities, like countries and regions, must be thought of as brands. Destination marketing is very much in vogue. Even London mayor Ken Livingstone believes the capital can benefit from a ‘clear, focused message’ (DW 20 March).

But can a city as sprawlingly diverse as London be said to have a generic identity? And who is likely to benefit from thinking in these terms?

‘We need to leverage all the groups of people who promote London to work as one force in getting people from abroad to come here, whether that’s for tourism, business or inward investment,’ says Tamara Ingram, head of Team London, the London Development Agency body set up by Livingstone to look at the issue.

‘The most important thing is to have an agreed set of values about what London stands for, [so that all promotional organisations] share an understanding about what is unique, magical and distinctive about London,’ she adds.

The London Unlimited moniker, created by Interbrand, is the result of Team London’s deliberations. Though Ingram fights shy of describing it as an actual brand, more detailed guidelines covering photography, typography and ‘how we tell our stories’ are expected. It also has an official brand essence – ‘confident discovery’ – to encapsulate London’s charms.

‘Oh, bollocks,’ says the design critic Stephen Bayley. ‘What does that mean, “confident discovery”? I’m so bored and so weary with politically directed groups trying to brand London. It’s a waste of time, a waste of neurons, a waste of pounds. You don’t need to convince me of the sense of getting the graphics right, [but] you have to get the product right first.’

Bayley famously resigned as creative director of the ill-starred Millennium Dome, exasperated with a scheme that had ‘more mission statements than content’. For similar reasons, he gives London Unlimited short shrift.

‘I don’t care how many glib brand champions [Livingstone] thinks he needs, parts of the city are filthy, lawless, overpriced and run by people who haven’t got a clue what they’re doing.

‘You can’t brand anything as subtle and complex as a city. Manhattan is relatively small and coherent, but London is characterised by its extraordinary anarchy. There’s not one London, but many of them. It’s unsusceptible to monolithic treatments,’ he adds.

Whether or not London’s vibrancy can be distilled into a single image is clearly a moot point. Wally Olins strongly advocates the principle of branding cities in the same way that he has advocated country branding, though this is often a reflection of the totality of an experience rather than an individual marque.

The Saffron Brand Consultants chairman feels London’s general efforts to date have been disappointing and fail match up to those of New York.

‘The only city in the world that compares with London is New York and New York is iconic,’ he says. ‘There are ideas about New York – the Big Apple [and] Gotham. But London has none of that.’

While he concedes much of New York’s visual mythology is ‘organic’ and ‘arose because it arose’ through cultural associations, he thinks London does need something that can signify ‘in a moment or two what it’s all about’.