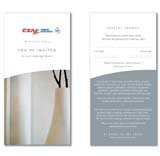 Czech national carrier Czech Airlines is launching its Karakter-designed rebrand this month, but has shied away from introducing a new visual identity because of the perceived cost.

According to Karakter managing director Shahar Silbershatz, the group created a marque that was signed off by the organisation, but ‘political’ pressure around the perceived cost of implementing it across the fleet saw the roll-out postponed.

‘The airline can’t be seen to be spending too much money on this,’ says Silbershatz, ‘so the old logo is remaining for the moment.

‘It will need to be reviewed later on because we’ve changed the whole brand language [to fit] around the new logo. It does work [with the old logo], but there is inconsistency,’ he adds.

Karakter was briefed to help the company modernise and become more customer-oriented, he says. As part of the revamp, the airline has introduced a new colour palette, typography and a ‘support graphic’ to a range of items, from menus and boarding passes to corporate stationery and internal communication material.

The website, www.czechairlines.com, is being refreshed and will launch later this year.

The airline’s business and economy class products have also been renamed and re-branded and a new communications strategy has been put in place with ‘much more human’ and consumer- oriented messages.

‘A big part of the change is the language the brand uses. It was very functional in the past, but now it’s more emotive, aspirational and touches on the allure of travel and discovery,’ explains Silbershatz. As the national carrier, it was also important to reference local culture, he says, and collateral now includes quotes from local writers and poets.

The graphic device references cut crystal and ‘the passion of the people’, adds Silberhatz.

The consultancy was appointed in December last year. Karakter creative director Clive Rohald was creative lead on the project.

• Budget carrier Go, with its Wolff Olins-designed identity, was credited with repositioning perceptions of the entire budget airline sector

• Air Canada launched a new look livery designed by FutureBrand as a fillip to its business health when it emerged from Chapter 11 bankruptcy last year.