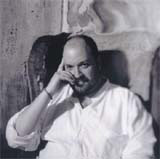 Dave McKean thinks nothing of mastering stage design, illustration and animation simultaneously, but his rigorous critiques of his own work keep him grounded. Nick Smurthwaite talks to him about his new film

Dave McKean has established quite a reputation for his distinctive posters, CD covers, graphic novels and illustrations for children’s books – such as The Wolves in the Walls and The Day I Swapped My Dad for Two Goldfish – created with his long-time collaborator, the writer Neil Gaiman. But last year McKean decided it was time for a change of direction.

‘I’d been doing still imagery, comics and illustration for ten years and I just needed a new challenge,’ he explains. ‘Both Neil and I were interested in making films. He decided to try his luck as a screenwriter in the US, while I preferred to stay at home and make some short films, just to see if I could.

‘I didn’t really know what I was doing,’ he adds. ‘I just sort of made them up as I went along.’

McKean’s shorts went on to be shown at various international film festivals, including Clermont-Ferrand, where one of them, N(eon), won the Grand Prix in the digital category in 2003.

It was seen by Lisa Henson, daughter of the late Jim Henson (creator of the Muppets), and co-chairman (with brother Brian) of The Jim Henson Company, which offered McKean £4m to make a full-length feature.

The resulting film, Mirrormask, is a startling and extravagant, visual kaleidoscope of dream-like images, telling the rite-of-passage story of a feisty 15-year-old girl’s thwarted attempts to run away from the circus – where she has grown up – and join the real world. Its UK premiere takes place at the London Film Festival next week.

Like so much of McKean’s graphic work, Mirrormask seems destined to attract a cult following, since it falls short of the commercial imperatives of mass market entertainment.

His own harshest critic, McKean himself says he would be happy to see it go straight to video. ‘In retrospect, it’s got lots of things wrong with it,’ he says candidly. ‘I regard it very much as a learning experience, my own personal film school – and this was my graduation film. Next time I shall be starting with a much broader platform.’

He worked with a team of equally inexperienced, though technically proficient, graduates from Bournemouth College of Art’s animation course – ‘We took about half the graduates from the 2003 course,’ he explains – who were encouraged by McKean to give their imaginations free rein.

The availability of over-the-counter digital animation software meant that McKean and his team could achieve things in half the time it would have taken them, say, five years ago. ‘I could have made the whole thing with a friend in my studio at home, but it would have taken us about 30 years to complete,’ he says.

‘Anyone could make a film on the scale of Mirrormask now, with a Mac and Maya software. It’s as big as the jump from silent to sound pictures in the 1920s,’ he explains. ‘I think you will get a whole generation of people coming to film from other areas, telling stories in a variety of imaginative ways.’

The need for a collaborative process involved adjusting from the solitary nature of illustration and graphics. ‘I’m used to working completely alone, without any editorial interference. Suddenly having to make 200 decisions a day, and get them right, was tough. It helps to have a strong team around you, giving you advice and telling you honestly what they think. Quite late into the shoot, I did change a sequence at the beginning of the film because everyone told me it didn’t work,’ he says.

Since completing Mirrormask a year ago, McKean has returned to book illustration, with two new children’s books to be published soon. More recently, he made his debut as a stage designer with a vampire musical, Lestat, based on the books by Anne Rice – the first stage production to be backed by the film-making studio Warner Brothers.

It has been another huge learning curve for McKean, who not only designed sets for the show – due to open in San Francisco in December prior to a Broadway run next spring – but also animation and live action film inserts. ‘The logistics of doing a stage show on this scale are mind-boggling,’ he says. ‘But it was still easier than Mirrormask, because you are not the one with the ultimate responsibility, and the creative team was made up of people at the top of their game.’