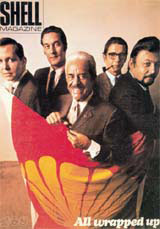 Raymond Loewy was responsible for some of the 20th century’s most iconic designs. But his legacy of the designer as marketer or superstar persists, argues Mark Delaney

Raymond LOEWY has been variously described as ‘the man who shaped America’ and ‘the godfather of industrial design’. At the peak of his career, it’s estimated that more than 75 per cent of Americans came into contact with one or more of his products every day. With two new books out and two retrospectives touring the US, Loewy’s presence and influence upon design show no sign of abating.

A French-born engineer, Loewy is best known for his streamlined designs for steam locomotives, automobiles and domestic appliances, as well as iconic graphic designs for companies such as Shell, Exxon and Lucky Strike.

Like his contemporaries, Walter Teague and Donald Deskey, Loewy came to industrial design from a background in advertising. Beginning his career in New York, as a department store window dresser and fashion illustrator for Vogue and Harpers Bazaar, Loewy developed a keen sense of public taste and quickly learned how skilful design, integrated with marketing, could be used as a strategic business tool to make products more attractive.

In the US, during the booming post-depression era, there was a sudden, unprecedented rise in the level of consumer choice. In this highly competitive market, companies had to find new ways to drive sales, and, for the first time, design became a commercial imperative. Through a shrewd combination of business acumen and design talent, Loewy proved that the success of a product is as dependent upon aesthetics as function. ‘The goal of design is to sell,’ he said. ‘Between two products equal in price, function and quality, the better looking will outsell the other.’ And then to drive the point home he added, ‘The loveliest curve I know is the sales curve.’

During the 1930s and 1940s Loewy was instrumental in the development of a new ‘modern’ design aesthetic which became known as the streamline style. Irrespective of their function, products became rounded and smooth, handles and grips were recessed, and sparkling chrome strips created speed lines. The design was not arrived at through a scientific need for optimal airflow. Indeed, many of the products to which this aesthetic was applied, such as toasters, were never intended to move.

A reaction against the Bauhaus-inspired functionalism that dominated European design at the time, this was styling, pure and simple, and it was applied to products, irrespective of their function, to make them more attractive and tempting. Through this focus upon decorative styling, Loewy and the other designers of this era effectively introduced annual model changes to the home appliance market – the birth of in-built product obsolescence.

In many ways, Loewy was the prototype for the modern superstar designer – his personality and charisma were as important as his business and design skills. His playboy lifestyle was every bit as designed and streamlined as his products.

Always ready for a photo shoot, he ceaselessly promoted himself through carefully composed and art directed images, in which he

figured as the central creative figure in front of iconic products. The reality was less clear-cut, with Loewy often being accused of taking sole credit for designs that he was only partly responsible for, or had little influence upon.

Whether you view Loewy as the arch stylist or an iconic, design superstar, he casts a long shadow over the design industry we see today. His market-driven design philosophy of Maya (most advanced yet acceptable) seems particularly appropriate for the ‘well-designed’, but generic products that dominate the market today.

And while he may have been the first, Loewy was certainly not the last designer to spend at least as much time designing his image as his products.