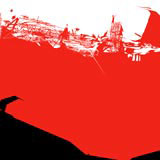 Graffiti artist Rough and photographer Tim Daly have collaborated on artwork for the first 12″ single from dance group, Stanton Warriors, which has been ‘heralded as the new [dance act] Basement Jaxx’, according to Daly. The single, called The Antidote, is released at the end of September, around the same time as the opening of an exhibition entitled Rigid Mouth. The show will feature both graffiti and digital artwork from Daly and Rough, and runs from 4-13 October at the Chamber of Pop Culture in London’s Bloomsbury.