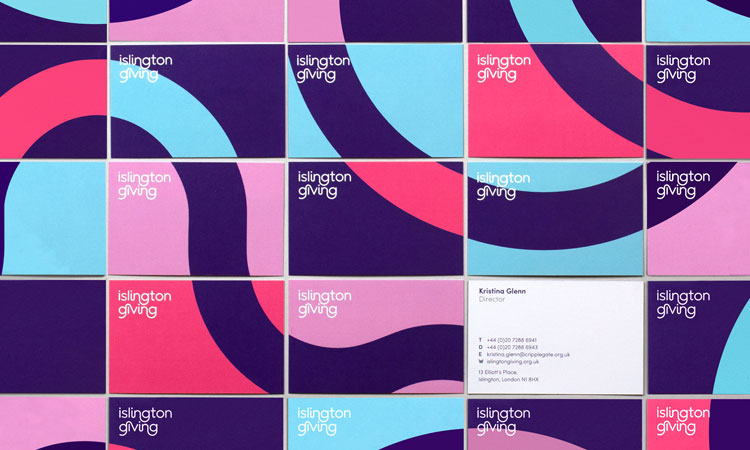 Blast Design has created a new visual identity and website for Islington Giving, a charitable initiative which helps a range of local causes in the North London borough of Islington.

Launched in 2010, it is the first of a series of “giving” movements in London, which now exist in most boroughs in the capital and encourage people to give what they can, be it money or time, to help improve the lives of others in the area.

Islington Giving works with a range of causes by providing funding, grants and support for voluntary organisations including mental health charity Islington Mind and family charity The Parent House. It is run by local charity, the Cripplegate Foundation.

Its key aims include tackling poverty and isolation. Since its launch, it has “supported 20,000 residents, funded 74 organisations across 158 projects, and [had] 5,000 volunteers”, according to Blast. 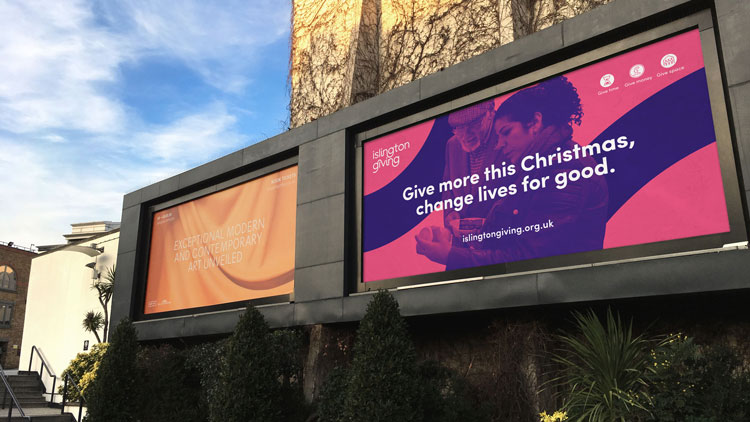 Islington Giving was keen to work with a local design studio on the rebrand project, according to Blast, which is based in Angel, Islington.

Paul Tunnicliffe, director at Blast, says: “Islington Giving wanted to reignite its brand and shift from speaking to a small group of people who know them well, to a much larger network of people who care about Islington.”

The branding project includes a new visual identity, a website, a range of assets including communications materials and merchandise, as well as brand guidelines.

The organisation’s previous wordmark consisted of serif lettering set in all-capitals, underlined by a red bracket. 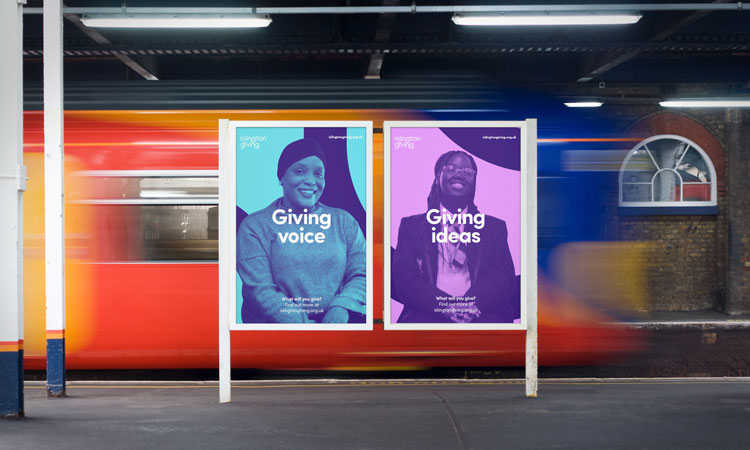 This has been replaced with a “contemporary” new wordmark which consists of the words “Islington Giving” in a sans-serif typeface set in lower case, with some letters joined up in a typographic ligature style.

The brand identity is centred around the idea of “bringing people together to create positive change”, according to the studio.

Tunnicliffe says: “The logotype uses ligatures to reflect this idea, its curves echoed in a connective graphic device.”

An animated version of the identity sees the words appear as if they are being written from the middle outwards. 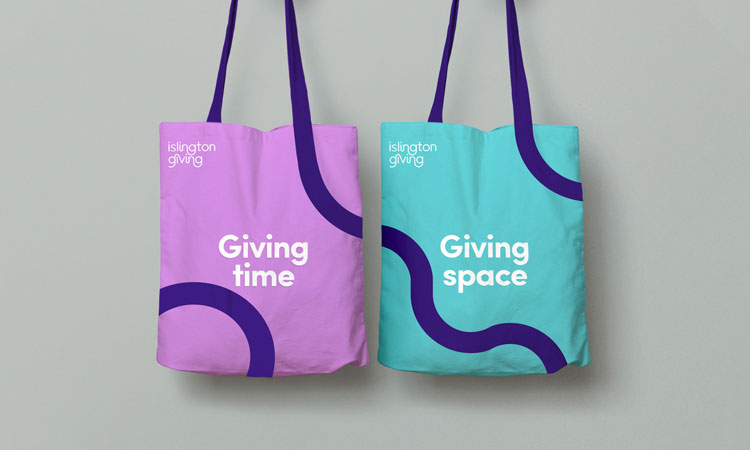 The core typeface used across the website and brand communications is a sans-serif called Sofia Pro.

A “bold, connecting graphic device”, which consists of curved lines similar to those seen in the logo, is used as a backdrop across different mediums, such as on the website and print advertising posters. The lines are designed to connect to each other when assets such as two business cards or two tote bags are placed next to each other.

Blast has also designed a website in partnership with digital design studio Mud, which worked on the programming and build. Much of the website is centred around people’s stories, with people photography on the site “highlighting the positive input of Islington Giving”, says Tunnicliffe. 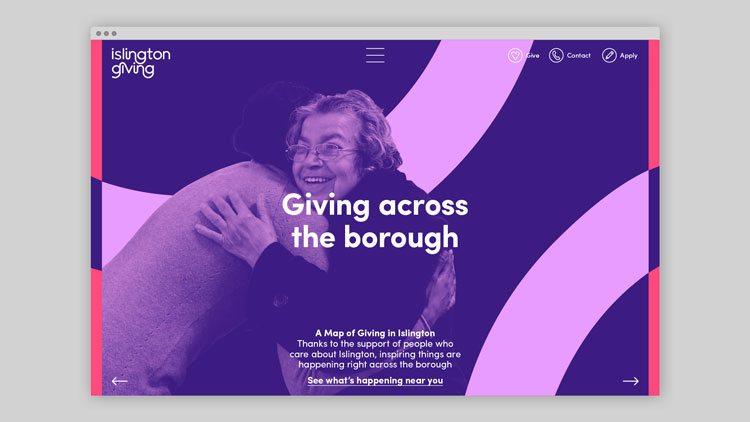 A range of coloured icons have been used on the site, such as an hourglass shape for “giving time” and a pound sign for “giving money”.

A key feature on the website is a new interactive map which lets people find out more about the projects the charity works with and where each one is based.

The studio has also written the strapline: “Bringing people together, changing lives for good”.

The new branding has been applied to the website and is being rolled out across a range of print and digital touchpoints. 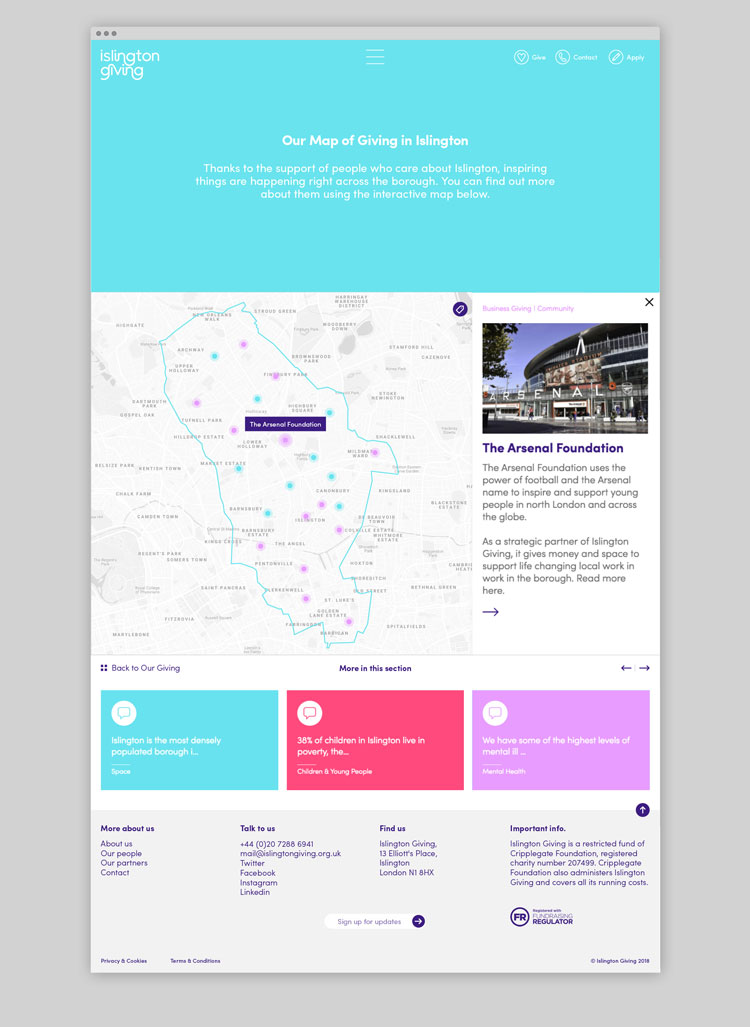 A holographic sat nav that projects directions on to drivers’ windscreens