A collaborative project funded by Innovate UK has resulted in an app that can help stakeholders design schools “in minutes, not weeks”.

The group was set up to address the “structural failings in the construction marketplace” which negatively impact the speed and cost of building schools in the UK. One of the outcomes of the £1 million grant-funded project is a set of “spatial design clusters” which have been embedded into a design accelerator app, in a bid to avoid these failings.

“The need to build schools efficiently is not going away”

Around 100 new and replacement primary schools are required every year in the UK, according to Bryden Wood director and head of global systems Jaimie Johnston.

“The need to build schools efficiently is not going away,” says Johnston in a blog for Innovate UK, who adds that investment in education is a main focus of the government’s current “build, build, build” strategy.

But while the need is ever-present, the price tag of building this number of new schools each year is significant – around £5 billion, according to Bryden Wood. For this reason, the Seismic consortium was set up to bring “digital and manufacturing innovation together” to transform the design and delivery of schools in the UK. 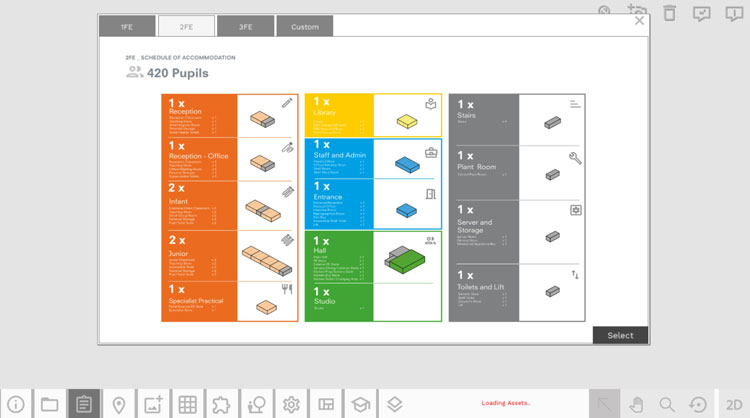 “From weeks to minutes”

Working with the Department for Education (DfE), Seismic identified school space standards and best practice design rules and translated these into a set of “spatial design clusters” – that is to say a kind of modular set of blocks which can be configured into a school “that immediately complies with DfE standards”.

These were then embedded into a dedicated school design accelerator app, which has been devised by Bryden Woods. Prism is a web-based, open-source, free-to-use app, with built-in building blocks which Johnston explains can be used in a similar way to how one might use Lego or play Minecraft.

“This automation of the application of design standards reduces the time and cost of initial feasibility and design phases from weeks to minutes,” says Johnston.

As well as for use construction schools, a separate but related app has been developed to bring this quick process to the construction of housing developments.

“Not just architects and planners”

The UX of the web app has been developed to “democratise” the design process and therefore be usable by all involved in a school construction project. Johnston explains it allows “not just architects and planners, but also teaching professionals, school governors, parents and even pupils” to get involved. Indeed, Johnston explains in his blog post that the app was tested on a group of schoolchildren in Hackney, who were challenged to design their own school.

First users choose their site and then the kind of building they want – including the number of floors and rooms and how many pupils. Once the parameters of the space have been set, users can then go about building something using Seismic’s digital kit of parts.

A design guide has been developed to help in this journey. For a 630-capacity primary school, for example, blocks have been categories for the likes of infants, juniors, storage, entrances and staff and admin facilities.

These are then made up of different elements – the staff and admin category for example contains blocks for a head’s office, meeting room, staff room and staff work room. As already mentioned, all of these blocks conform to DfE standards. 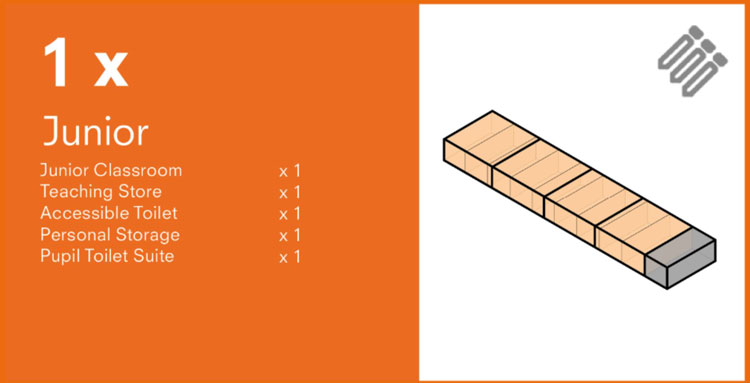 “Simplifies the solution while creating economies of scale”

By allowing collaboration within the school construction process, Johnston says the work has created a common solution where “secrecy and distrust are the norm”. Additionally, such a method would decrease the footprint of the building work.

“By reducing the number of components, it simplifies the solution while creating economies of scale,” he says. “The solution is suitable for 3D volumetric frames, and 2D panelised designs, allowing a range of potential solutions for specific sites [and] the redesigned frame could be erected more quickly, with a 52% reduction in assembly time.

“Our results show that collaboration among industry partners and specialists from parallel sectors, via The Manufacturing Technology Centre, connects expertise to produce innovation that can transform the sector,” he explains.