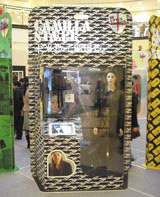 Go on admit it, at an earlier stage in your life you played with dolls (Action Man qualifies). And, at around the same tender age, you raided wardrobes and attic suitcases to create unprecedented outfits in games of ‘dress-up’. Some of us still do…

Wouldn’t you love to be transformed into an idealised version of yourself, attired in a perfect outfit, surrounded by objects you find inspirational and indispensable? That’s the deal Catterall offered ten leading lights of the UK fashion, design and clubbing scenes. Catterall, in her role as curator, supplied a list of names to the British Council, and it shortlisted a cross section of London creatives to be remade as personalised mannequins.

Whenever anything tiny is rendered at a more massive scale the effect is mesmerising; whether it’s Disney’s walkabout characters, Warhol’s Brillo Boxes or fictional worlds such as The Borrowers or A Bug’s Life. Unsurprisingly, these life-sized dolls, complete with ‘facsimile’ heads (they look like their designers!) caused quite a stir when unleashed on China earlier this month.

Installed at the CITIC Square Shopping Mall, the exhibition, entitled UK Loves Fashion, took Shanghai’s seasonal Fashion Festival by storm, with TV crews and reporters queuing up for a glimpse. The bravest visitors also had an opportunity to get in on the act – box number 11, equipped with mirrors, a camera and a stash of clothes and accessories from Top Shop awaited living doll volunteers willing to ‘free their creativity and self-style’.

While fashion designer and illustrator Julie Verhoeven kitted ‘herself’ out in own-label Gibo, furniture designer Martino Gamper styled ‘himself’ more anonymously, but ‘dressed’ his box with objects he’s produced, including the Fox Stool and personalised napkins from his cook-in evenings at Clerkenwell bar, the Hat on Wall. Graphic designer Kate Sclater of Hyperkit dressed ‘herself’ in a signature ‘London-trendy’ mix of designer labels (a Sonia Rykiel pink-striped jumper), high street chic (her black skirt’s from Top Shop) and streetwear glamour (Silas’s leaf belt), while shoe designer Olivia Morris flagged-up the inspirational importance of London’s second-hand markets by featuring a chrome Sputnik chandelier, teamed with a vintage dress (again from Top Shop) and her own silver glitter shoes.

Working with three-dimensional designer Mark Garside of Crystallise and graphic designers Rhonda Drakeford and Harry Woodrow of Multistorey, the idea of the exhibition was to make the clear box and printed backboard look as realistic as possible, while underlining the style of the individuals. It revives a concept used in 2001 for a show in Tokyo’s Harajuku district.

Garside refined the construction method for the polycarbonate boxes, employing a snap-bend, where previously the shapes were bent using heat. The end result is a more accurate angle, closer in look to the injection mouldings used for toy packaging.

Meanwhile, the whole exhibition had to be transported flat-packed, with limited previous knowledge of the venues, and only Garside from the design team on-site. ‘When you’re designing a bespoke structure,’ explains Garside, ‘there are always going to be problems you’d never foresee, but this time it all fitted together, not like when we had to search Tokyo for extra rivets!’

While Catterall has been receiving updates on media coverage from the British Council in China, Garside witnessed the public’s reaction to UK Loves Fashion in situ. ‘There was a massive amount of interest in the exhibition,’ he says. ‘Youth culture hasn’t really kicked off in China – there are a few trendy bars – so it’s an interesting time to be showing stuff. It’s about to start though, in a big way…’ So things could get even more interesting.