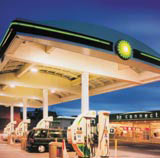 Set against Selfridges Food Hall, petrol forecourt is not the sort of phrase to get the pulse racing. It sounds about as sexy as John Major’s cones hotline. But if you’re imagining soggy pasties and rows over roadmaps, think again.

Datamonitor last week identified the petrol forecourt as one of the prime sites for retail growth in the food and drinks sector. And designers could be in a position to win work as the market shifts gear.

According to the analyst, sales from forecourt shops will increase by 4.5 per cent a year to 2007. That’s more than double the rate of food and drinks retailing overall.

Sainsbury’s plans 100 Local outlets on Shell premises over the next three years. Tesco and Marks & Spencer Simply Food are both eyeing forecourts expansion. And the trends involved are worth pulling over to consider.

Supermarkets are interested because planning regulations restrict their opportunities out-of-town and high street locations are so costly. Fuel retailers are keen to boost their income from higher margin, non-fuel items, as rising oil prices and taxation levels hit their profitability.

Given petrol stations’ under-used yet often ideally situated real estate, it looks like a marriage made on the kerbside. However, Astound director Mark Dickens believes supermarkets, with their feeling for demographics, are in the driving seat.

‘There’s a different mindset between the two [stakeholders] in how to tackle this market.’ Astound has worked with both Tesco and Esso on separate projects. Dickens finds, not surprisingly, that each party tends to assert the primacy of their own offers.

With its Beyond Petroleum strategy, Landor client BP has probably done more than any other oil company to change public perceptions, says Marcello Minale, managing director and design partner at Minale Tattersfield.

He credits BP as being the ‘market leader’, observing its positioning as ‘looking like a grocery store that also sells petrol’. Nonetheless, he thinks petrol companies face an uphill struggle ‘convincing consumers that they haven’t just painted their station green’.

Commercial partnerships may make ‘perfect sense’ in many respects, as Minale points out. But, Dickens notes, ‘where the tie-up works, it is in favour of the food retailer’. Since petrol is a distress purchase, Dickens says, ‘people aren’t very loyal to the brand, [whereas] food retailing has a slightly different bias’.

For designers, the mechanics of the project start there. These link-ups present an ‘interesting mismatch’, Dickens suggests. Consumer messages can be crowded, as petrol and food offers compete to prioritise space.

‘Sometimes you’re hacking through Shell to get to Sainsbury’s,’ he says. ‘The petrol station is an obstacle.’

Exterior design must be based on ‘a good frontage and visibility for both pedestrians and vehicles’, says Minale, who has worked on numerous forecourt briefs, including Reliance in India (DW 29 August 2002) and Delek in Israel.

‘A convenience store should always be situated in front of pumps, so that as a customer you are perpendicular to the store, which is shouting come inside.’

But consumers are often ‘disappointed’ once they enter, Dickens says. ‘They assume it’s a Tardis and the same as the one down the road, which is nine times bigger.’

Certainly, what Minale calls ‘total retail identity branding’ – consistent visual language across point-of-sale, signage and display – can manage expectations. However, the strategic question is increasingly – in Dickens’ words – ‘what do customers want out of the location, rather than what can we sell them?’. Which means re-thinking what’s meant by convenience.

Welch cites AM PM, a standalone venture from Arco in the US and designed by Landor San Francisco, as the way forward.

‘Everyone talks about creating destination brands in this market, though very few people achieve that. Proximity is the main issue for convenience stores, but AM PM has become a meeting place, a favourite store and even a place to hang out.’

US formats might be bigger than those in the UK, but Welch believes lessons can be learnt (see left). Dickens agrees that ‘quality lines, meal solutions, time of day purchasing and flexible merchandising’ are all crucial.

Clearly, forecourt designers have plenty of ideas in the tank. But only by having the right mix in the right location will brands deliver the most miles to the gallon.

Considered convenience: ‘We’re too familiar with the term “convenience” and a bit lazy with it. [Offers should be] less about formula and more about forging a needs relationship with consumers.’

Micro-marketing: ‘No two communities are the same. Assess what each locality is lacking and provide those products and services.’

Precision convenience: ‘Drill down further. What offers do people want at different times of the day? How can design and display package these offers?’

Themed convenience: ‘Doing what Vittorio Radice did with Selfridges on a micro level would get people talking. Develop local themes to reflect community concerns.’