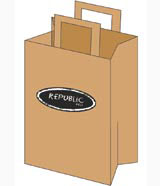 The Formation is working with Coffee Republic on its transformation from struggling coffee bar chain to New York-style delicatessen pioneer, it has emerged this week.

The Bobby Hashemi-founded chain operated 110 espresso bars until last Christmas. Now it is ‘consolidating’ its offer to around 65 outlets that will be gradually rebranded as Republic Deli, which trading director Mike Baker sees as catering for a ‘gap in the market’.

An ‘operational trial’ of the new format in a ‘hybrid’ store in London’s Baker Street has led to the first Republic Deli opening this week at Broadgate in the City.

The Formation, led by creative director Adrian Kilby, has created an identity, packaging (pictured) and store graphics, while Stanza Design under director John Kirkup has worked on interiors.

Impetus for the move has come from within the business, Baker says. But The Formation, which also worked on the original Coffee Republic brand, is ‘working on the transition of the business [and] articulating what we’re about in the brand and point-of-sale’.

Coffee Republic has struggled to hold its own against Starbucks, Costa Coffee and CaffÃ¨ Nero in a highly competitive market.

The deli concept will introduce snacks such as bagels that are hand-made in front of the customer, instead of ‘pre-made wedge sandwiches’.

Baker says the revamped brand will offer the ‘fast, ten minute, casual lunch’, with the same quality standards as Pret A Manger, but ‘without losing the credibility’ of Coffee Republic.