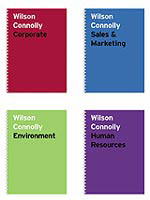 After limited branding and design activity in the housebuilding sector, there is now a flurry of activity driven, in the main, by mergers and acquisitions.

Even the biggest players account for only about 10 per cent of all new-build homes, so there is much opportunity for consolidation, says Richard Eagleton, group marketing director of housebuilder Wilson Connolly. Land buying is getting harder and harder as there is simply less of it, and planning permission is becoming more difficult to obtain, he says.

Consultancies may be enjoying the rich pickings following this mergers and acquisitions activity, but the market has its own idiosyncrasies, as they have discovered.

Last week, Basten Greenhill Andrews presented design concepts to housebuilder George Wimpey for the rebranding of its three sub-brands under the George Wimpey banner. It is also overhauling the master brand (DW 14 February).

And next month sees the unveiling of a brand identity for housebuilder Wilson Connolly, which is merging its two consumer divisions, Wilcon Homes and Wainhomes, into one brand.

Hookson is creating all internal and external communications material for Wilson Connolly’s soon-to-be-launched consumer brand Wilson Connolly. The logo, created by ad agency Publicis, is unveiled on 1 March and the first fruits of Hookson’s work, the annual report, will be published simultaneously.

People’s perceptions of housebuilders have not been particularly positive in the past, a Wilson Connolly spokesman says. ‘They are often indistinguishable in people’s minds from “cowboy builders”.’

The company carried out research that showed many people label housebuilders as untrustworthy.

Brand identity work in the housebuilding sector, therefore, not only has to overcome these negative perceptions, but also hurdle consumers’ inherent worries about purchasing a house, which is, after all, the biggest purchase an individual is likely to make.

‘A housebuilder’s brand’s role is to reassure customers,’ says Basten Greenhill Andrews managing director Tim Greenhill. A new-build house purchase is driven both by rational thought, which the brand can influence, and irrational emotive decisions. ‘You fall in love with a property,’ he says.

Greenhill likens the housebuilding sector to the automotive industry, in terms of the size of the purchase and the role of a brand to reassure, particularly in terms of safety and security. ‘It is up to a consultancy to create an identity that is effective in the market and assures consumers, and the only way of doing it is to understand the importance of a house purchase itself,’ he adds.

Furthermore, says Greenhill, buyers of houses vary hugely because house types vary so much depending on size, location and cost, which means that a housebuilder’s brand has to appeal to a broad sector.

‘In some instances, a rural pad can cost the same money as an urban penthouse, yet the consumer will be completely different,’ he says.

Good quality lifestyle photography is very effective in conveying the quality of a property to a potential buyer, too, which enhances a housebuilder’s brand values. But the brand must be supported by rigorous standards within the company, such as sticking to agreed completion dates and strong customer care, or any branding work is wasted, Hook says.

The infrequent nature of house purchases means loyalty to brands is low. According to Kenrick, people are likely to buy a house once every seven years on average. ‘Housebuilders are dealing with different scales of interaction with their brand, compared with, say, a Mars Bar, which is probably bought once a week,’ she says. Brands, therefore, can mean little to consumers, she says.

‘The Internet and viral marketing campaigns are two highly effective ways of reaching consumers, particularly as Internet users will have already expressed an interest in the market by logging on,’ Kenrick comments.

But in terms of consumer brand awareness, however, housebuilders face an uphill struggle.

‘There are no brands, in the truest sense of the word, in the housebuilding sector,’ comments Kenrick. Consumers cannot assign a set of characteristics to a housebuilder in the same way that they can, for example, to a national supermarket like Tesco, because they are unfamiliar with them.

A brand must be explained to, and understood by, staff first and foremost, says Kenrick. That way, it stands a chance of appealing to consumers.

The economic climate also affects housebuilders. Like all companies, they suffer in a recession, but if the UK is on the brink, is now the time to be spending money on your image? And aren’t investors more concerned with whether properties stand empty?

Hook rejects the notion that housebuilders in particular should be more accountable with their brand identity work, especially at times of economic uncertainty.

Investors do not panic about name changes, he says. ‘People always need houses and Wilson Connolly has spent a minimal amount on this rebrand compared with its competitors.’ He declines to name the fee.

Hook concedes, however, that Wilson Connolly had to be aware of how its spending was perceived in the City and that it made a ‘conscious effort’ not to overspend on the identity.

‘The branding had to be done because [Wilson Connolly] acquired Wainhomes and needed to consolidate its offerings,’ Hook says.

Whether or not the UK is on the brink of a recession is irrelevant to a rebranding campaign, Greenhill contends.

A rebrand is driven by the circumstances of the company not market conditions, he says. ‘It would be unusual, for example, to see all companies in a sector rebrand at once,’ Greenhill says.

However, a chief executive would have to argue a strong case to its investors for a large-scale rebrand, he says, particularly if it was just seen by the board as a cosmetic change.