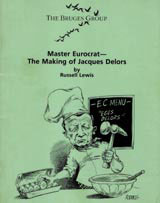 Straw states that the design consultancy appeared to be unaware of the existence of The Bruges Group’s swan logo, adding that this is ‘perhaps not surprising, since it appears that [the logo] was placed on The Bruges Group website on 1 July’, the date of Lord Lamont’s original open letter. However, The Bruges Group has supplied Design Week with an example of its flying swan logo in print, taken from a 1991 publication entitled Master Eurocrat – The Making of Jacques Delors by Russell Lewis (pictured).

In his letter, Lamont claimed The Bruges Group had taken legal advice and he offered the Government an opportunity to ‘explain the circumstances surrounding the creation of the logo’ before the group would consider taking action against any breach of copyright.

The Bruges Group will meet on 26 July to discuss how to proceed, says Bruges Group director Robert Oulds. Any legal case would appear to rest on an assertion that the similarities between the two identities result from copying rather than coincidence, as Straw attests.

The Foreign & Commonwealth Office maintains that all the necessary checks for visual intellectual property were performed with the Patent Office when its trademark application was accepted.

The Johnson Banks EU Presidency design was first revealed in February (DW 17 February) and has subsequently appeared in the media and on the Foreign & Commonwealth Office website. In his letter to Lamont, Straw says, ‘There has been plenty of opportunity before now to raise any genuine concerns you or The Bruges Group may have had about the logo.’

The Eurosceptic group’s objections to the Government logo coincided with the launch of the UK’s six-month EU Presidency on 1 July.

‘The ball is not in our court any more. If the Patent Office or The Bruges Group want to take this any further, then we will respond to that,’ says a Foreign & Commonwealth Office spokesman.