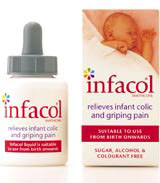 Dew Gibbons has redesigned the identity and packaging for the UK’s biggest selling treatment for infant colic, Infacol, which hits the shelves next month.

The five-figure redesign was prompted by an increase in rival own-label and branded treatments. A revamp of Infacol was required ‘to protect [the brand’s] leadership status’, according to Dew Gibbons creative director Shaun Dew.

Following research by Infacol owner Forest Laboratories that revealed the existing design was perceived as too ‘medicinal’ and ‘evoked psychological guilt of administering medicine to babies’, the identity and pack have been redesigned to appeal to parents emotionally.

‘We wanted to create a friendlier personality for the brand to support its image of a gentle, soothing remedy,’ Dew says.

A flower petal device has been introduced to the identity in primary colours, with the ‘petals’ representing individual drops from the pipette that is used to administer the medicine to babies.

The brighter colours are designed to stop the brand looking overly pharmaceutical, but are subdued enough to retain the brand’s credibility and to prevent slightly older children thinking it is a drink, which could be dangerous, she adds.

The consultancy has introduced a picture of a baby wrapped in a blanket as a branding device, designed to project feelings of softness and calmness.

‘The overall tone of the packaging is informative, safe and comforting,’ says Infacol product manager Sarah Cratchley. ‘It should instinctively appeal to parents.’

Dew Gibbons won the work without a pitch on the back of previous work with Cratchley on Novartis’s Savlon brand.