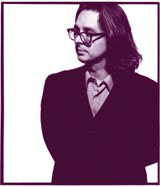 Yes, that’s right. The man who owned one of the hairiest heads in design has had a snip. What is it about D&AD presidents? When Richard Seymour, also once a man with a sizeable proportion of all the hair in design on his head, was elected as president he too chopped the locks.

Is there some sort of code of conduct that D&AD presidents have to abide by? Are they secretly whisked off to a boot-style camp and told to march up and down for ages singing ‘I’m a happy designer’? We absolutely demand to know.