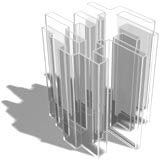 ‘It’s fantastic… and a nightmare,’ says furniture designer Michael Sodeau of his ongoing collaboration with digital media specialist Tomato. Sodeau is working with Tomato to create a range of Tomato-branded products, the consultancy’s newest foray into 3D design.

Tomato and Sodeau have worked together before, on a laminate table produced by Michael Sodeau Partnership. For that kind of collaboration, Tomato receives a royalty cheque from Sodeau. However, this time it’s the other way around. Sodeau is one of the consultants for the new Tomato range, which, if successful, will then roll out with other designs.

‘It’s still very much in the early stages,’ explains Sodeau. ‘But the idea is to [initially] create and brand a number of products as “Tomato” for the 100% Design Show.’

They are working together on a range of very simple, minimalist products. ‘It’s got to be something you can take away in a bag, not sofas or beds or anything on a large scale,’ says Sodeau. So far the products include vases, bowls and gift items such as the Baby Box, which contains a book and a T-shirt for babies.

Sodeau admits that the collaboration has its problems, but says, ‘You get difficulties on any project.’ He says that at the first product selection meeting the team came up with 42 potential items which have now been whittled down to 15. The ‘nightmare’ part of the project is not Sodeau’s working relationship with Tomato, but the complexities of managing 15 different products with 15 different manufacturing processes. In times of technological wizardry, Sodeau says they worked in a ‘traditional way, with sketches, and then developed prototypes’.

Sodeau says that he’s enjoying the opportunity to work with people with diverse skills. ‘We really work well together. Tomato brought things to the relationship and I’ve brought different things such as my knowledge of manufacturing and the technical side,’ he says. ©