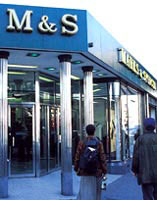 Sales at Marks & Spencer stores using the chain’s new design format are on average 16 per cent higher than in its old-style stores. The company has released trading figures for the new sites as it announces a new top management team.

The three stores to have been modified – in London’s Kensington, Fosse Park and Sutton – are to be followed by a further 19 by November. The format was created by M&S corporate designer Charles Jaggard (DW 28 July).

The 24 weeks to 16 September saw M&S achieve overall sales down by 0.3 per cent compared to the same period for the previous year. Like-for-like figures, which exclude stores or retail space added since last year, show sales down by 2.8 per cent.

Executive chairman Luc Vandevelde, who is assuming the responsibilities of the chief executive role, says, “These changes will inject new blood and management skills to strengthen our strategy and execution.”