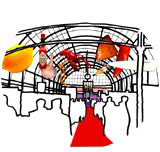 Designer Julyan Wickham has made a bid to inject some humour into the identity for the forthcoming Restaurant Show and Design Vision 2000 hospitality exhibition, which open together at London’s Olympia on 1 October.

The concept shows two vibrant colourways – purple and red – to lift the large, often dry, exhibition space at Olympia. In the entrance, Wickham is creating a sweeping red carpet to create the kind of glory found at the Oscars and dispensing with the traditional registration desk in favour of larger-than-life letters to which delegates can stick their visitor passes.

For a final flourish, the concept includes suspended giant inflatable food-related objects, such as a red chilli pepper, a Tabasco sauce bottle and a huge lobster.