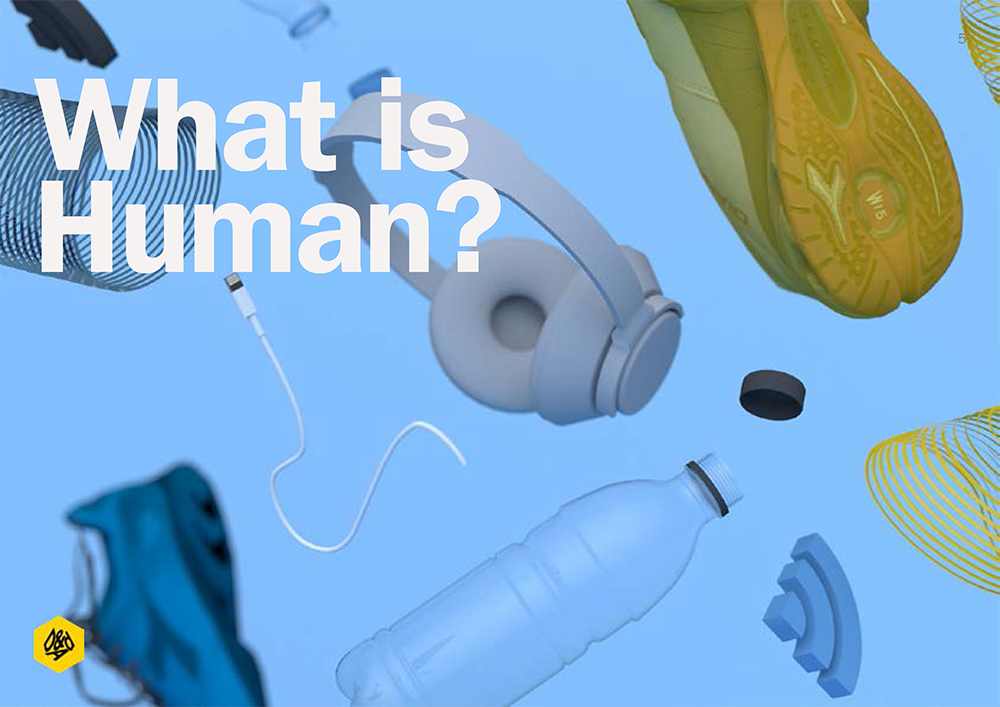 The report, designed by Adam Morton-Delaney and illustrated with render images by Charlie Jeffries, looks to use the work submitted for the D&AD awards to identify key themes impacting the design industry this year. Three main trends were highlighted, broken down into the strands What is Human?, Fractured Society and Access All Areas.

According to D&AD, among the best work from designers in the past year that tackled human-based ideas (the The What is Human? aspect) focused on “our drive to the be the best version of ourselves”. A key finding in this year’s work was that while wearable technologies that collect data such as physical activity and body temperature are still booming, there’s a notable shift towards brands looking at mental as well as physical health.

Among the examples of tech brands claiming to tackle users’ mental health are Instagram and Facebook, which launched a “Time Spent” feature in May last year for users to track the time they spend on the platforms. Apple also launched a feature for users to track screen time a month later in June 2018. Samsung’s contribution was a little more futuristic: knee-high robot Bot Care, a cute but strangely unnerving little creature that can monitor medication and sleep, offer exercise tips and contact caregivers and the emergency services.

It’s interesting to note that while designers are creating a number of initiatives that aim to improve people’s mental health, the design industry itself is still fraught with employee wellbeing issues: a study cited in the report from ad agency and media wellbeing non-profit company National Advertising Benevolent society (NABS) and mental health charity Mind found that “60% of employees in the industry say that their job has had a negative impact on their wellbeing in the last year.” As such, D&AD urges design consultancies to “explore the actions you can take to provide health and wellbeing improvements for those around you, even if it means asking tough questions about your company culture.” 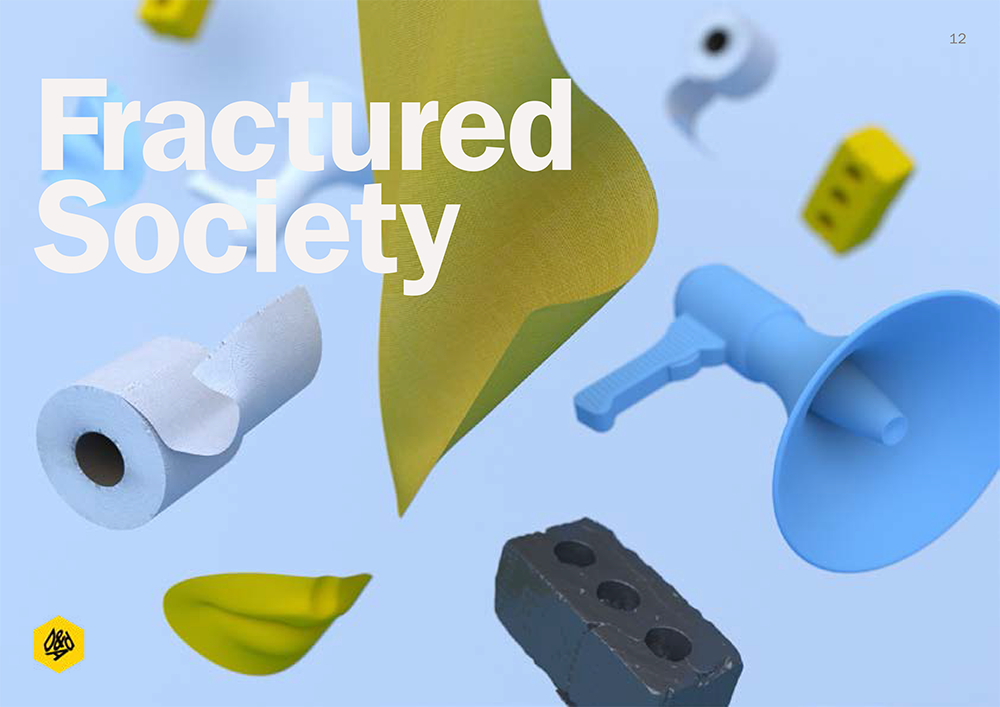 Work falling into the Fractured Society category was that which saw brands and their design work responding to global issues impacting society. Popular targets include Trump, Brexit, the Philippine president Rodrigo Duterte – who this week said he’s ready to “declare war” against Canada over rubbish containers in his country’s ports – and Venezuelan politician Nicolás Maduro.

In the report D&AD says, “The void between society and politics feels like a growing chasm. Brands are continuing to pick sides and creatively push this agenda to the world. But some of them are also offering escapism to ease the tension and returning to brave, bold and humorous work that offers a little relief and some welcome distraction.”

Part of the drive for designers and brands to work on issues affecting society is of course steered by those buying their products: D&AD cites a 2018 survey from American PR and marketing consultancy firm Edelman as stating that “ 64% of consumers choose, switch, avoid or boycott a brand based on its stand on societal issues.”

However, the D&AD report suggests that successful, savvy design work can also look to humour in these strange and often bleak-seeming times. Projects cited as exemplifying such a stance are Mother London’s FKC: FCK campaign for KFC, which scooped a Yellow Pencil at the D&AD Awards 2018. The project was created in response to the closure of hundreds of KFC stores in February last year when supplier issues meant that Kentucky Fried Chicken branches found themselves without their essential ingredient, chicken. Posters that appeared in newspapers swapped KFC to “FCK” in a bid to change the brand’s scathing press into a witty response. 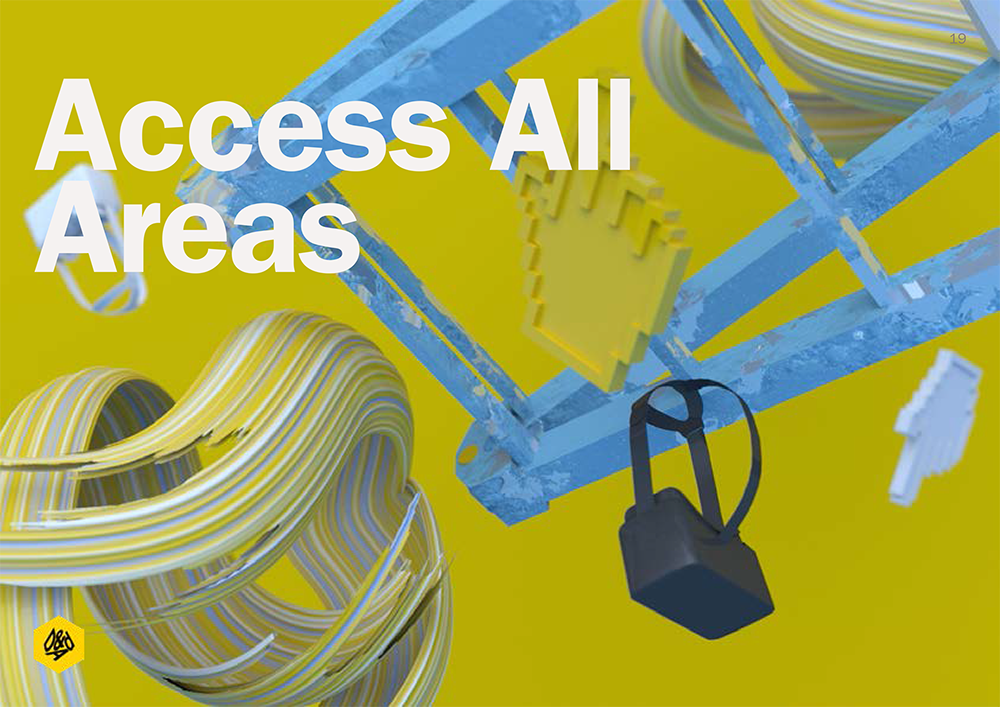 Finally, the Access All Areas trend was identified by a slew of work that uses new and evolving digital channels and technology, notably AI. “It’s rapidly evolving to become an important tool in the era of big data… helping us distill and digest vast data sets to provide answers, offer security and give insights into our everyday behaviours,” says D&AD. The Financial Times, for instance, recently began using bots that aim to help tackle diversity in reporting, such as the “She said He said” bot, which highlights how diverse sources quoted in any given article are (for instance, warning journalists if they’re only quoting men.)

AI is also being used by Google to encourage politeness, with its Google Assistant responding more nicely to users who say please and thank you. However, D&AD adds that Google’s autocomplete “still pulls up awful suggestions in relation to race, religion and gender” years after the issue was first reported to the tech giant. 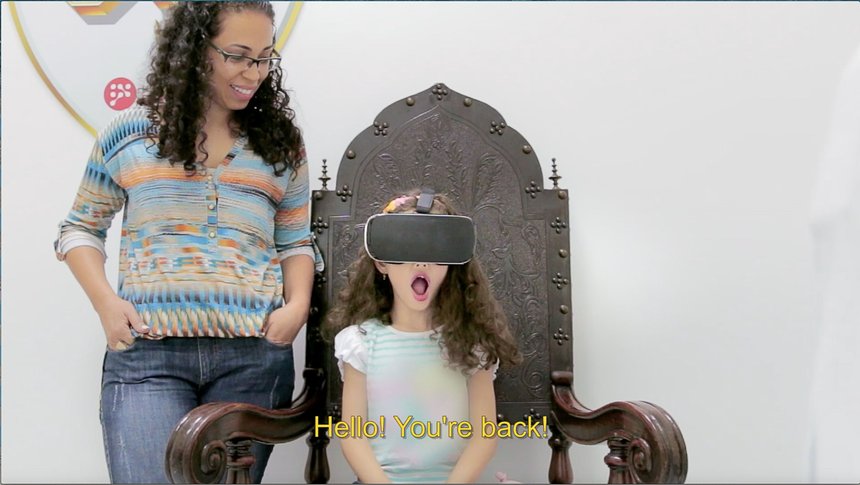 Highlighting the potential of VR in healthcare settings, D&AD awarded a Graphite Pencil to Ogilvy Brasil for Brazilian vaccine centre Hermes Pardini. To help kids overcome the fear that surrounds injections, a headset was created that takes them into a virtual land of superheroes, with the jab itself timed to coincide with a virtual “super-shield” added to the child’s arm.

AI as a creative assistant

Designers’ tools are also rapidly developing with new AI technologies. In early 2019, Adobe announced the incorporation of its Sensei deep learning algorithms into its Creative Suite products, which will help with tasks such as removing backgrounds in Photoshop and removing objects from video. “In this way, AI is becoming a creative assistant that will help us be more productive,” says D&AD.

“While these initiatives show the power of AI, it can’t do the conceptual thinking for us and it doesn’t understand how to craft an idea. Instead this is about working with technology to help do it better… while technology opens up new opportunities to create personal, tailored content and reach people, it requires creativity to really cut through the noise.”

The organisation adds: “Stop relying on technology to teach us the rules and start viewing tech as a platform or tool to create ideas, rather than the idea itself.”