The End of Store Street exhibition celebrates some of the most iconic images from The Warehouse Project’s history.

The club night took residency for 12 weeks a year in the Store Street venue under the arches of Manchester Piccadilly station for 10 of the past 12 years.

Bringing performers that range from Fatboy Slim to The Prodigy, Chic to Erol Alkan, the music event has grown and gained popularity over the years.

The exhibition, which was launched as part of Design Manchester 2018, shines a light on the art and design linked with WHP. 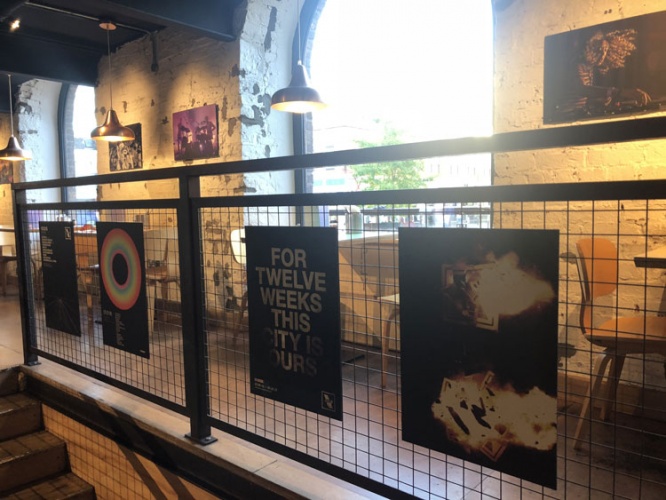 Graphics, artwork and posters by Paul Hemmingfield are on display alongside photography by Sebastian Matthes, who both co-curated the exhibition at Ply in Manchester’s northern quarter. Both have been involved in the project since its inception.

Sebastain Matthes, says: “The night has been going since 2006. Since 2007, with a couple of years away, we have been in that venue for a total of 10 years, but this season is definitely the last at Store Street.

“We thought let’s celebrate that in a way that is not a rave but recognises the art behind it, the graphic design and photography that has been involved since day one.”

Paul Hemmingfield’s designs include the WHP logo which features the graphic outlines of two heads and a series of monochrome stripes. It was originally used in full colour, as a large image on an event poster, alongside text in Helvetica – the text had originally been intended to be the logo, but this quickly changed.

Hemmingfield says: “The heads represented WHP’s two founding partners with 18 colour slashes through the middle which spelled out The Warehouse Project in code – each letter was assigned a colour and this has carried on throughout the seasons.

“By season three the heads had become a bit of a logo so l restyled it to be used for that purpose.”

The colour-code was incorporated in most posters from then on, which the designer says usually aim to be both “striking” and “minimal”, while conveying all the necessary information. He says he draws inspiration from graphic design “pioneers” including Josef Müller-Brockmann and Otl Aicher, among others.

The exhibition features simple typographic posters, others that only show up under UV light and posters created using stop motion animation.

One of Hemmingfield’s favourite works is a 2007 listings flyer, in which the colour code was expanded to form the main design.

“This was the first time the code revealed explicitly. Before it was just part of the design,” he says.

“As Store Street had been used as an air raid shelter and is just up the road from a statue of Alan Turing, I thought it was a nice idea to take a poem my brother wrote, ‘The Never Ending Circle of Soldiers’.

“The main image was an abstract grid made up of the poem typed out with each letter replaced by a square. Squares with the letters from ‘the warehouse project’ were in their corresponding colour and the rest of the letters were marked by their number in the alphabet. 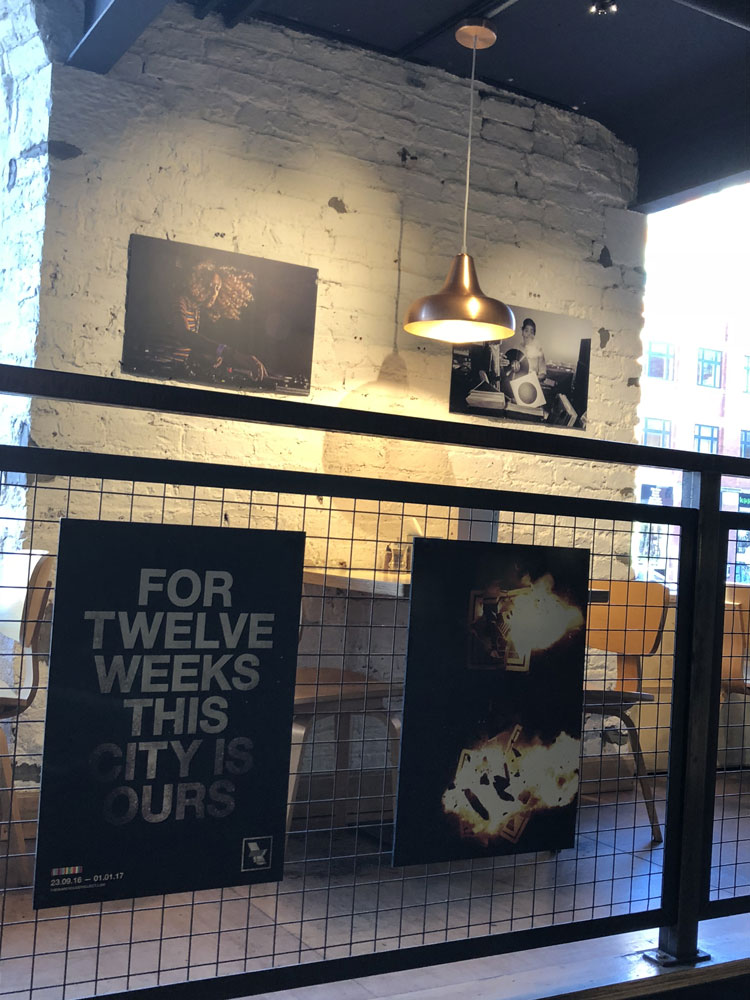 “The flyer also had a codebreaker clue wheel on, and if anyone could crack the code they won a season pass.” He has also used the same code to write listings.

Among his most famous designs is an image of a white dove that has appeared on numerous posters in various guises and colours, first used in 2008 with coloured wings and lasers spelling out “thewarehouseproject” in the code.

“The brief behind it was in some way to represent acid house raves,” Hemmingfield says. “I didn’t want to go down the obvious smiley face route or be overtly ‘druggy’ but found out the original ecstasy pills of the 1980s were called white doves, hence the dove.”

He adds that the image was not promoting drugs, but just providing “social commentary through design”.

Over the years, Hemmingfield says more animation has been brought into WHP designs to keep up to date with social media and technology, but he adds that he still loves the poster format.

Photographer Sebastian Matthes, whose work forms the other part of this exhibition, also designed the display – and admits that narrowing down 10 years of Store Street into one room of images was no easy task, particularly as he has “tens of thousands” of photos to choose form.

A “50/50 split” of artwork and photography was included, which he feels the chosen venue – which is also a restaurant, with white-washed brick walls – is well suited for.

Photography is on the back walls, while graphic posters are attached to the black metal railings around the room. 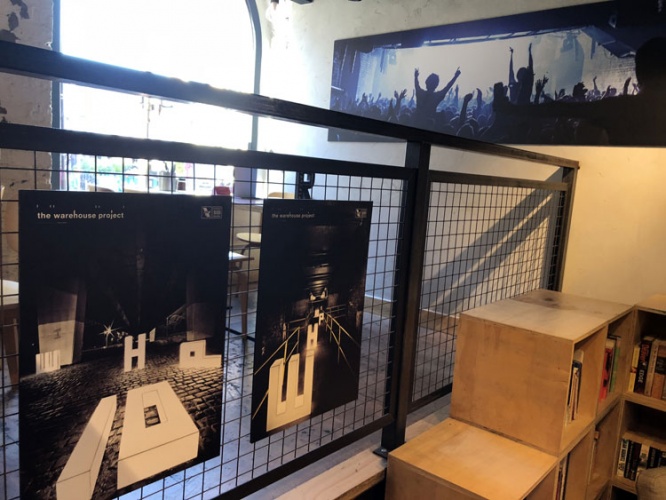 The exhibition had received a positive reaction so far, according to Matthes, who says: “There were people who stood in front of posters on the exhibition’s opening night who were almost teary-eyed, saying ‘Oh my god, we were there that night.’”

Shots by other photographers who have worked at the venue also feature, while one area in a back corridor is dedicated to a selection of small images of friends and family linked to the event.

Matthes says: “People who have been running it, working at it, cleaners, various friends and family of the event… It’s not just about the rave itself, it’s about the people who make it work behind the scenes. They deserve a bit of exposure.” 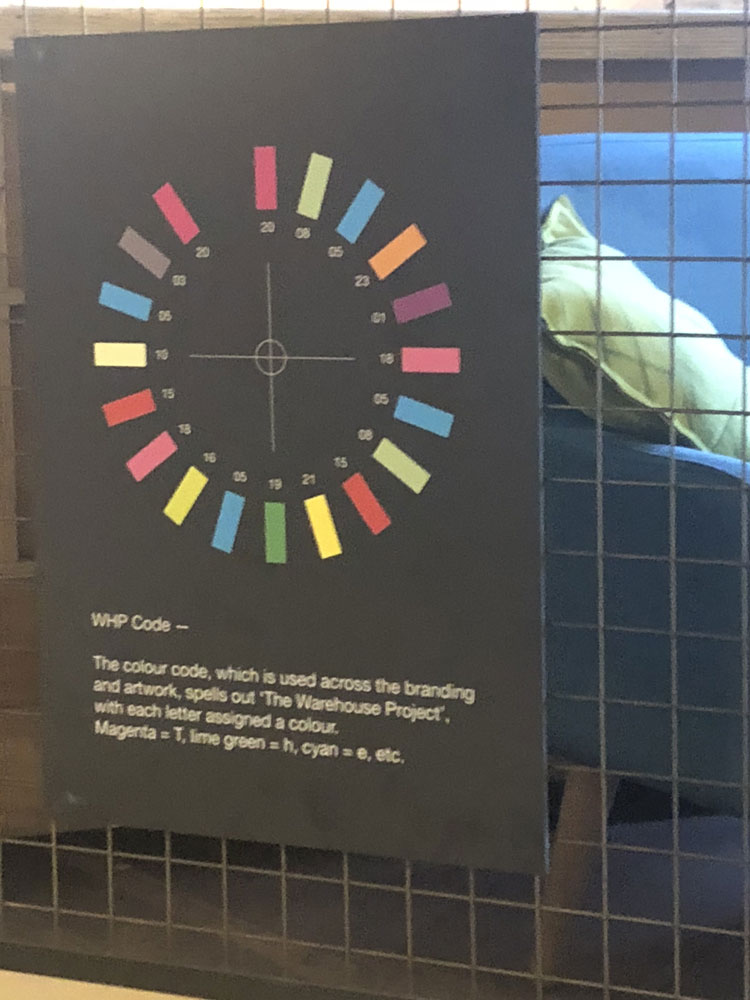 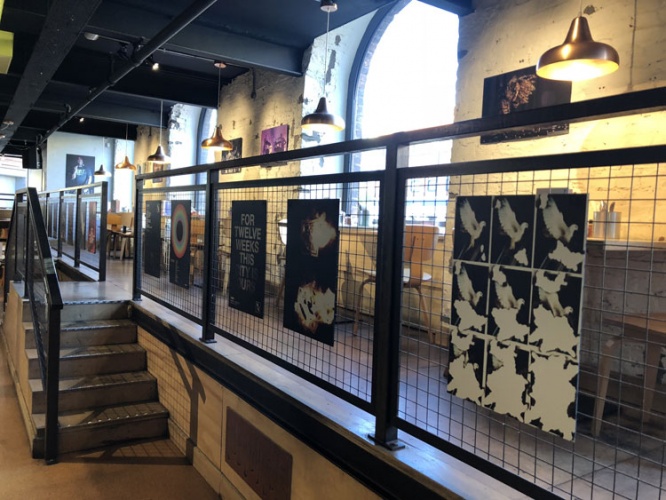 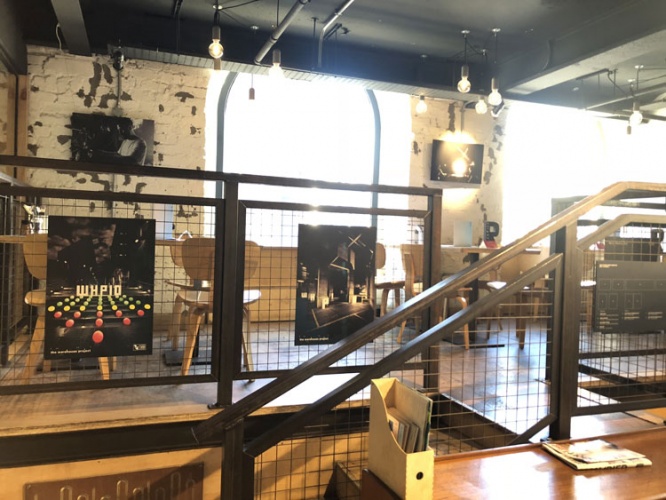