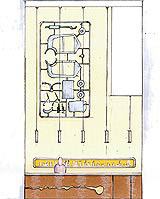 Philip Watts Design has created a state-of-the-art Indian restaurant called 4550 Miles from Delhi, which will open in Nottingham later this year.

The consultancy, which also created the restaurant’s name and identity, this week finalised designs on the £300 000 project, for which MKC Design Consultant has been appointed as architect.

Restaurant proprietor Danny Punia is confident he is meeting a growing demand for traditional Indian cuisine in a trendy, spacious and clean environment.

Philip Watts Design managing director Philip Watts says the consultancy has created a theme that eschews the traditional ‘flock wall paper’ look of many British curry houses in favour of a ‘funky’ theme.

‘Restaurant owners are scared to go for the genuine, slightly kitsch, Indian look. Our aim is to create a modern Indian concept of good quality that can be transferred to other locations like London, although the name will be altered to 4340 Miles from Delhi [to reflect its distance from the city],’ he adds.

The concept allows for an open-style theatre kitchen and a genuine Indian rickshaw to be reassembled as a wall hanging. It will also have Italian-made chairs and tables inlaid with bronze droplets, according to Watts.

The consultancy was appointed in June.

It’s all about getting yourself a reputation