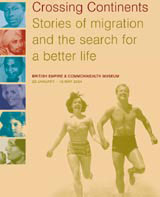 Bristol consultancy Qube Design has been commissioned to create three temporary exhibitions that will open at the British Empire & Commonwealth Museum in Bristol at the end of January.

The work reflects the museum’s house style, which is described by Durrant as ‘contemporary and quite gritty, with flat colours and clean type’ and it also makes use of images from the exhibitions.

Vanishing Rites, an examination of the indigenous people who live in the Chittagong Hill Tracts in Bangladesh, features photography by Bristol artist Ina Hume.

Qube was appointed in November following a three-way pitch. The project is believed to be worth in the region of £15 000 in fees to the group.

Meanwhile, the consultancy has been commissioned to create a 52-page catalogue for The Art of Furniture exhibition which will take place at Birmingham City Museum from 28 February. The exhibition will showcase the work of more than 40 contemporary British furniture designers.