The design of a new pedestrian and cycle crossing that could become the next bridge to be built across the Thames, has been unveiled.

A design team led by Bystrup Architecture Design and Engineering is set to be announced as the winner of a competition to create a new crossing between Nine Elms and Pimlico in central London.

The design has been recommended by a jury, and the design will be discussed by Wandsworth Council for a final decision on 30 November.

The council says this will be the first bridge in the centre of a major world city to be designed around the needs of cyclists and pedestrians. 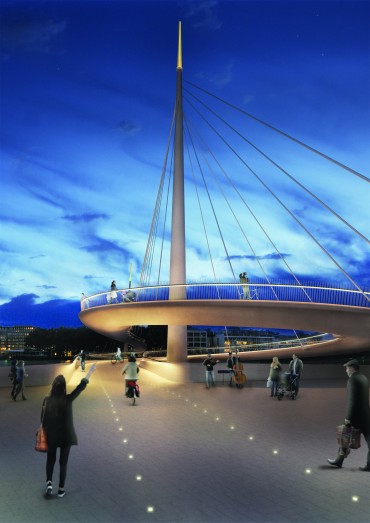 Among the design challenges will be the need to raise the bridge high enough from the riverbank so that large vessels can pass underneath it, but without creating too steep a slope for cyclists and pedestrians.

The team was selected over three other shortlisted designs, from teams that included Marks Barfield Architects, AL_A and Hopkins Architects. In total there were 74 international entries into the bridge design contest.

Erik Bystrup, of Bystrup Architecture, says: “From the outset we wanted to design an elegant bridge that provided simple and uninhibited access for all, with minimal impact landings on each bank.

“We are very excited that this will be the first shared pedestrian and cycle bridge over the Thames, adding to the rich history of London’s river crossings.”

The scheme would need to go through the planning system before it could be built, and would need consent from Wandsworth and Westminster Councils, as well as the Mayor of London.

Top 5 design things to look out for in December