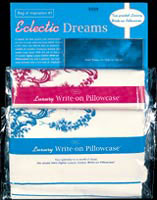 What inspires you? A walk in the woods? Six pints of lager? An evening of 1970s soul music? The gentle lapping of an incoming tide? A friend of mine in advertising swore by half a bottle of port and a ripe stilton, followed by three espressos. He wouldn’t get a wink of sleep, but the ideas came thick and fast.

If that sounds a bit drastic, you could always invest in The Bag of Inspiration, arguably the year’s wackiest publishing enterprise so far.

It is the dreamchild of Justin Barnes and Ben Callis, two young creatives from Ogilvy, the ad agency, which is providing financial backing.

The Bag – each issue will be some variation on the container theme – isn’t so much a magazine as a gift package for the person who has everything.

Unlike magazines, this is something you’d buy for someone else (for a laugh), not yourself. The first edition, Eclectic Dreams, is all about exploiting and capitalising on your dreams, nailing that one big idea that will buy you a villa in the south of France.

OK, so you’ve woken up in the middle of the night with your Nobel prize-winning idea. You grope around in the dark for a pen and a piece of paper, trying not to wake your partner. But by the time you’ve located the writing paraphernalia the idea has gone forever.

What Barnes and Callis are offering is luxury write-on pillowcases, specifically designed for that moment in the wee small hours when cerebral lightning strikes. Don’t search in vain for that elusive piece of paper, simply jot your idea down on the pillowcase in your semi-conscious state.

‘The margin between success and failure is a narrow one,’ says an accompanying booklet of tips for creative dreamers. ‘After ten minutes you lose 10 per cent of total dream recall. After 20 minutes you’ve lost the lot. You must take action before procrastination tosses your future into the abyss.’

The second Bag in October will be Trash Your Workspace, which encourages creatives to surround themselves with crushed-up drink cans, screwed-up paper, smelly old trainers and other detritus in order to stimulate better ideas.

Well, it works for me!

The writers are also planning a Bag full of money, either fake or some virtually worthless foreign currency, to see if people find the sight of a stash of cash a spur to their creative juices.

Barnes and Callis are aiming their Bags at other like-minded young creatives in need of external stimuli to assist in the production of new ideas.

Either that or they’re hoping to make a name for themselves by creating a gap in an overcrowded market.

It may sound like one of Private Eye’s mail order Christmas gifts – ‘the perfect gift for someone special in your life who hasn’t got any ideas’ – but The Bag of Inspiration is genuinely original and it is the silly season, after all.

Bag of Inspiration will be available at the end of August from bookshops and galleries, priced £24.99