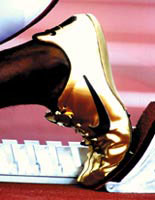 In the US state of Oregon, in a town called Beaverton, lies the home of Nike. It’s a West coast base, sandwiched between the states of California and Washington, on a sprawling campus of buildings, near the city of Portland.

The backbone of Nike’s US design force is situated here with some 300 designers. This is more than a North American operation though; it’s the nerve centre for much of its international output too. Design here, falls broadly into three categories: footwear and equipment, apparel and image design.

At the campus, products take centre stage and have done so for the past few years. Within footwear, for example, are about a dozen categories, ranging from basketball shoes to tennis and hiking shoes. Sergio Lozano is creative director of perhaps the most important category of all, certainly within the footwear division – Nike running shoes. It is a worldwide operation and the category for which Nike is famous.

There are effectively two other design divisions. Apparel is, as the name suggests, tailored to clothing, while Image is responsible for Nike’s more brand-led design, such as environments (such as NikeTown stores), graphics and literature. The product designs of equipment (including watches, eyewear, MP3 players) and footwear are housed together in the same building. It’s more than a little complex.

This year, Lozano and his team, launched what is probably the most design-intense sports shoe range of all time – Nike Shox. The design was a backroom project that had been on the shelf for a few years, which finally came together at the start of this year. It was not just a shoe, but a completely new system that turned conventional thinking on its head.

Lozano joined Nike straight out of California State University, where he studied product design. He was born in Buenos Aires and at the age of five his parents moved stateside. In 1990, his graduation year, Lozano says Nike was on a ‘really big growth curve’.

‘It [Nike] was recruiting straight out of school that year. It interviewed most of the class and at the time I was thinking there was no way I wanted to work for Nike – designing shoes was not real design,’ Lozano says good humouredly.

He interviewed with them anyway, as any career-conscious student should, more for the experience than for a job. ‘I thought it would be good for the portfolio,’ he adds. Lozano was among five students invited for a second interview. ‘I wasn’t sure what I would do if I was offered a job,’ he says. But as his future employer began to take an interest in him, he started to realise the potential on offer.

He expected to stay at Nike for about two or three years. Over ten years on and his extended stay, he says, is testament to the value of the job. The design function grew, grew and grew some more. The footwear division, for example, consisted of some ten designers when he joined. Now it is close to 60.

Footwear used to operate as a central pool of designers working over a number of product ranges (or categories). Then the business was re-organised around the categories.

‘Some categories became separate businesses units (ACG, Golf, Jordan, Soccer), which function separately and have their own budgets and financial accountability. All other categories are “co-located” and function like smaller businesses, but are still under one umbrella,’ Lozano explains, careful not to divulge too many secrets to the competition.

Designers, marketing, development engineers and support workers now form the basis of each working team for each product category. ‘All the large categories, such as running, basketball and cross-training, are in one building,’ Lozano explains. ‘There are about 70 people co-located in running.’ Other categories are similarly scattered around the campus.

Despite this spread, Nike designers do get together. Within each project team they sit together (Lozano’s design team is currently about 12 designers) and there is the odd social meet-up organised within the divisions, as well as a formal day-long gathering once a year for all 300 designers on site.

Lozano works with the leadership team, as well as his designers, to set the direction of new running shoe designs.

‘Typically we have three seasons – spring, fall and holiday season (Christmas),’ he says. They gear up for each season and put a plan together on the product lines that are going to be developed – anything from 18 to 25 projects per season. The only rule is there is one designer per project. This is so each person can begin to take ownership of the design work. Each creative gets together with a development engineer and a marketing person ‘to sketch on each other’s work’.

‘There are certain aspects that make a running shoe a running shoe and over the past 20 years we have developed a set of best practices that we use. Some features will be incorporated before we start designing, which depends on the type of runner we are designing for. We probably get to experiment with something like 10 per cent of the shoe usually, though now and again there are new inventions like Shox.’

‘The designer is responsible for everything from the ground up. It’s not just styling. Aesthetics come into the process as well, but we design the whole thing. We have access to the Nike Research Lab downstairs, which is a huge resource with testing equipment and biomechanics experts,’ says Lozano.

‘Some projects take half an hour to design on paper and are very, very successful. With others you can try and try, and seemingly get nowhere.’

1987 – The emergence of the cross-trainer

1994 – Nike launches recreation initiative for children called Participate in the Lives of America’s Youth – Play. It includes the Reuse – a shoe scheme which diverts used shoes from landfill sites and reconstitutes them into court surfaces

2000 – Revenues start to grow again, but much less prolifically than during the 1990s

The design process for Shox broke new ground by using spring technology found in racing car engines. Sergio Lozano says a very small design team had been working on the advanced cushioning system in 1990 when he arrived at Nike (some say it is over 16 years’ old), but it was shelved for a while due to insufficient materials and technology. Besides, the existing cushioning system, Nike Air, still had a lot more potential, which the company was keen to capitalise on.

‘Shox was taken down off the shelf several times. Then two or three years ago we began looking into it more closely,’ he says.

Lozano says Shox was originally conceived as a running shoe, but it was decided to bring it out as a basketball shoe first. This brief was then broadened to three models – running, basketball and cross-training. He got together with the original design team to look at some of the material issues and stability issues facing the concept as it had been left.

‘It was very challenging. A lot of projects have known parameters and technologies, but this was different. We were really trying to break new ground,’ Lozano says. He was personally in charge of the design of the running shoe. He knew it had to be special. ‘The last thing I wanted to do was design a shoe that just looked like any other shoe we had done,’ he says.

‘We took a trip with some designers to San Francisco to brainstorm and sketch some ideas for Shox,’ Lozano says. He was looking for a futuristic appearance, so he experimented with space themes and shapes such as rocket boosters. While he was in San Francisco, he was captivated by a postcard of James Dean next to his silver sports car with red leather seats. It was an image that captured the style, celebrity and danger he was looking for – the look of the final shoe was born.

The final product was a legacy all of its own, with input from designers and directors from all corners of the company (Bruce Kilgore, John Tawney, David Bond and John Hoke III). This is no one man’s tale. It is a story of design collaboration. Sixteen years of the stuff.