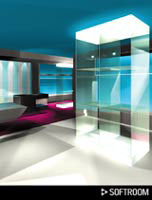 Japanese menswear label Designworks is opening its first store outside Japan, with the launch of a flagship outlet in central London’s Soho.

Softroom is creating interiors for the store, which is due to open at the beginning of September. If successful, it could be the basis for a national or even European roll-out, says Designworks director Max Plaskow.

The group won the project, worth a five-figure sum, without a pitch through previous contact with Designworks.

Interiors for the UK flagship will be different from the five sites in Japan, says Plaskow. It will feature Japanese influences, but will be less ‘English’ than the Japanese stores.

The store will be split into formaland casualwear areas, with ‘museum-style’ glass display cabinets, ‘stage-like’ window displays and contrasting flooring.

‘The shopfront will recall the traditional shopfronts of Bond Street and Savile Row, but present the clothes in a contemporary setting,’ adds Plaskow.

The Designworks marque will be unchanged, but Softroom will be developing it internally, says Plaskow. ‘The identity has to work for Japanese people in the UK, as well as for consumers attracted to the brand,’ he adds.