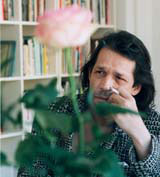 Adidas has agreed to drop its branding to secure the design services of Peter Saville on a future range.

The graphics star is part of a cabal of designers and artists contributing to a series of limited edition Adidas trainers and tracksuit designs that will launch this spring.

Adidas has been approaching ‘some of the world’s best known and highly regarded creatives’, to give their interpretation of the White Series of clothing products, originally launched as Adicolor in 1983. Each contributor produced a design in one of six colour schemes – red, blue, yellow, green, pink or black – mimicking the original Adicolor products, which were customisable with six felt-tip pens, sold with the trainers.

Saville says he was initially reluctant to take part in the project. ‘When they asked me to do it, I said no, because I thought it wasn’t meaningful. I thought it was about Adidas trying to gain credibility,’ he says.

The approach he proposed, and which Adidas Heritage Division accepted, was to confirm the ‘artificiality’ of the design brief in the final design. ‘This is a gesture worth making at this point/ to confirm what the intelligent consumer already knows,’ adds Saville.

Adidas senior lifestyle promotions manager Gary Aspden rejects the idea that the company is seeking the credibility of creatives. ‘I question the idea of Adidas needing credibility. The company has got such a strong history itself, it doesn’t need credibility from others,’ he says. ‘What Saville wanted to do was be as transparent as possible with the relationship between the client and artist, using the brief as part of the solution. We realised that if we were to put a blank canvas brief on the table like that, we had to accept what the designer came back with,’ he explains.

Saville’s ‘anonymous’ products feature virtually no Adidas branding, other than on the pre-moulded trainer soles, while key sections of the design brief, such as ‘relevance for lifestyle consumer’, are spelt out on the lace jewels and tracksuit zips. ‘They let me use the brief, positioning and corporate strategy as the ornamentation of a core product,’ adds Saville.

• Adicolor originally launched in 1983, as white trainers with six coloured felt-tip pens; it relaunches this spring with further customisation tools