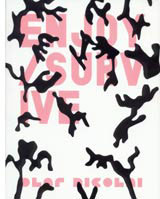 A glance round the shelves of London bookstore Magma would suggest the art of printing is alive and well, and a closer inspection of what’s on those shelves might reveal even more; that the industry is more vibrant, diverse and innovative than ever.

So why does Tim Milne, partner at London printer and design/print broker Artomatic, have such a gloomy take on the industry’s future? ‘For a number of reasons, printing’s going down the toilet. There’s stagnation; too many printers and a shrinking market. Because their business is all assets-based, printers are very inward looking. Their focus is on meeting the payments on the equipment without too much disruption, and information-based print is declining because information is better dealt with and delivered through broadcast media such as the Web. So that’s an area that’s going to face big problems over the coming years, he predicts starkly.

Designer Morag Myerscough shares some of his feelings. ‘On the one hand, there are some emerging technological shifts – such as electronic printing – that are quite exciting, and it’s true that printers are being more helpful and responding to the needs of designers more, but they need to push the boat out to be a bit more responsive and adventurous. That’s hard to imagine, because printing’s so formulaic and the machines aren’t really able to respond to unusual needs,’ she says.

Fortunately for Milne, Artomatic’s in the lucky position of not being too badly affected by such difficulties. Since its inception 20 years ago, the company has gone from strength to strength, constantly researching, experimenting and pushing the boundaries of printing and use of materials, so that now its work in information-based print is minimal.

Instead, it works largely in such burgeoning print markets as product, packaging, direct mail and promotional material, producing such things as the famous Spiritualized CD medicine packaging by Mark Farrow Design, chocolate tools for Audi by Jam, acrylic packaged CDs for Alexander McQueen by Walker Gellender and canvas bags embroidered in silver for Kiehls by the Kiehls in-house design department. It’s a long and impressive list that illustrates the company’s passionate belief in the importance of designer and printer working together towards ‘an emotional culture that is just as important as the brand culture’, says Milne.

He cites the changing role, look and feel of books as integral indicators of that growing emotional culture. ‘I don’t think books are purely information-based print now, the best ones are iconic objects whose design and content emotionally engage the reader/viewer, and I don’t mean just design or niche books. People buy Jamie Oliver cookbooks in droves because they want to buy into the associated lifestyle – they’re making an emotional connection with it, and print plays a huge part in that. But while hours and hours of consultancies’ work are put into branding and understanding the brand culture, no one’s really looking at the print aspects of the brand,’ says Milne.

Graphic Thought Facility director Paul Neale identifies the problem as one of being culturally sensitised. ‘Designers are, printers aren’t. It’s true that printers appreciate the ways that different materials can create emotional responses, and we’ve been lucky enough to find printers like Xtraprint that are always willing to have a go. But ultimately printers don’t realise the emotional significance that backs up the products they print,’ he says.

One publisher that is very aware of the emerging emotional culture is Berlin-based Die Gestalten Verlag, which in the past two years has produced books in semi-transparent plastic, polythene, padded hardcovers, cardboard, cloth, leather, wood and metal. Such materials rarely present any special problems for the handful of German printers the company uses, and both design director Robert Klanten and production manager Janni Milstrey attribute that to the way they work and communicate their requirements. ‘Most of our books are printed at Medialis, a Berlin-based printer. Along with economical and geographical factors, our decisions on which printer we use are based on the quality we can expect, not just printing quality.

‘We also set value on reliability, co-operation and the readiness to run experiments and tests, explore unusual or new printing methods. Essentially, we expect the printers to have a passion for the subject beyond usual professionalism,’ she adds.

There’s no doubting that here in the UK Artomatic is one of the few printers working with unusual materials that has such a passion. Trickett & Webb director Heidi Lightfoot describes its position as ‘unique’. ‘It has always seen itself working in collaboration with designers, whereas with most other printers it’s just the designers speccing the material so there’s no room for the kind of happy accidents you might get with Artomatic,’ she says. ‘But things are slowly changing, and while there are still cultural and cost reasons for printers not being very proactive, innovative or willing to take risks, printers like Ventura and Perivan have always been very flexible, and they work hard to make it work for the designer,’ she adds.

Rob Gaddie at Artomatic is more bullish. ‘Materials and new advances should be embraced, not avoided, as is so often the case. Materials and processes are a very important part of our business, and keeping up with them is tricky but essential,’ he says. One good example is the Alexander McQueen CD, a screen-printed piece whose outstanding chic and simple look belie the intricacy of the product. The brief for Walker Gellender, which designed the package in conjunction with Artomatic, was originally to produce an invitation to the launch of the Alexander McQueen shop in New York.

Alongside this, McQueen wanted Walker to develop a product based around the invite that could be given away in a limited number at the shop opening – hence the CD. The two clear discs – a male disc that screws into a female one – are made of cut and polished, 10mm-thick sheet acrylic. A shoulder on the male side, the same thickness as one CD, allows the two halves to screw together without touching the CD. The CD was screen-printed in matt black on to the black polycarbon disc. The body of the clear acrylic CD holder was printed with a clear matt vinyl extender base to effect an etched look. Remarkably, recalls Gaddie, ‘The only real problem with the job was that the acrylic, which was produced in Holland, went missing in transit for a few days, causing a little panic as the lead time at the beginning of the project was several weeks.’

All of the other elements were printed in the UK and, under Artomatic’s watchful eye, went smoothly, lending weight to both Milne and Klanten’s advice about understanding each other’s businesses. ‘Most misunderstandings result from the absence of a shared language, or the absence of time,’ says Klanten. If things are properly discussed early enough with the printer you can avert problems in advance. And we’ve never experienced the notion that printers do not welcome questions. We usually ask a lot of questions when planning a production. Some questions might appear needless, but we’d rather ask too many than too few. Milstrey worked several years for Medialis and others in our team have hung around printers checking the production for years, so there is almost no technical aspect we’re not familiar with,’ he says.

So what should designers be familiarising themselves with? Milne and Myerscough both identify a trend for organic, crafts-based objects, materials and skills, and Lightfoot agrees, citing the desire for individualism as a factor. And, looking further, Milne has a long-term plan for Artomatic: ‘Too many clients, designers and printers are fixated with fads and trends that refer to themselves rather than the brand, medium or message. It’s stupid creating a lenticular poster campaign just because it’s the latest thing, but too often that’s what clients do, without thinking about the emotional message at all, or whether it’s the best and most appropriate solution for their brand.

‘Artomatic is in a position to bring to print aspects of such jobs, the same level of understanding that is put into branding aspects. We have something to say to the industry, and the world would be a poorer place without us.’

No One on ‘global footing’