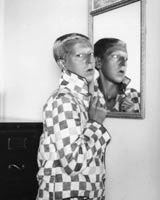 Tom Wolfe, Beau Brummell. Oscar Wilde, Aubrey Beardsley, Cecil Beaton. What do they have in common? They’re all dandies, of course. For over 200 years dandies have been admired and scorned in equal measure. Always objects of interest and curiosity (not to mention desire), dandies have been ripe for serious research and re-consideration for many years.

Photographers, in their endless pursuit of the marginal, the excluded, the outsider, and the exhibitionist, have been drawn to the dandy pretty much since photography was invented. The growth of photography has paralleled the rise of the dandy. No surprise then that this is a rich seam in their visual heritage. Well documented, yet surprisingly underseen. An in-depth study has been long overdue.

This year sees two exhibitions on the dandy theme. One is on a world tour; the other is about to open as a major part of the first Brighton Photo Biennial.

21st Century Dandy, already launched in Moscow, was assembled by the British Council and will be travelling the world promoting certain elements of British style and fashion design. It is unlikely that you will be able to see it in this country, which is a pity. The show, designed by Andrew Stafford with graphic design by Miles Murray Sorrell of Fuel, is a taster for the whole subject. The catalogue – which is available in the UK – leaves you wanting more. The text is highly readable and the specially-commissioned images by Nigel Shafran show us some thoroughly up-to-the-minute dandies in a strangely random collection of settings. But here we only see the male dandy.

In Make Life Beautiful! The Dandy in Photography at the Brighton Museum & Art Gallery you’ll see some female dandies too. This exhibition is a more ambitious affair. Curator Jeremy Millar really gets his teeth into dandyism and how it has been depicted in photographs. He uses a narrative history structure to unlock some of the key issues surrounding the dandy – their attitude, motivation, class and context.

On the way, we are shown some fantastic images by some of the world’s most accomplished and admired practitioners – a veritable roll call of the history of photography – including Irving Penn, Ida Kar, Man Ray, Beaton, David Bailey, Robert Mapplethorpe, and August Sander as well as work by newer (Jason Evans) and lesser -known (Pierre-Louis Pierson) photographers. This is no ordinary art historical quickie of an exhibition. It’s a visual feast.

TV personalities like Chris Eubank would seem to epitomise the idea of dandy. To Jeremy Millar they are caricatures. He’s gone in search of the real deal. The dandy as outsider, on the margins, making a statement to shock and impress and provoke. Millar sees our view of the dandy as simple: ‘an aristocratic male marked by ostentatious display and a certain effeminacy’, but admits that the truth is more complex since the dandy can be far easier to recognise than to define.

For Millar, the dandy is a member of a ‘self-created aristocracy’ – an exclusive group that is based around attitude, desire and elegance. Millar explains this by quoting Albert Camus: ‘The dandy is always in opposition’. So dandies define themselves as outsiders, due to gender, sexuality, class or race – they are always trying to mark out their own special visual territory.

No mere poseurs or stylers, dandies work hard to stand out from the crowd. Make a statement. Be noticed. Often it is in the details of their style. Always it is in the attitude – as we see from the images in this show. From the black dandies in IkÃ© UdÃ©’s previously unseen work to Bailey’s famous Michael Caine portrait, or from the Teddy Boys of the 1950s to the Mods of the 1960s. Millar covers most of the bases.

Then there are the all too often neglected female dandies. Gender and sexuality are blurred in pursuit of the dandy look. Millar shows us an unusual collaboration between the Countess de Castiglione and photographer Pierre-Louis Pierson, which lasted almost 40 years and the remarkable images by surrealist artist Claude Cahun of what Charles Baudelaire called the ‘modern hero’. We are also offered Sam Taylor Wood’s self portrait for good measure.

So, what of dandies in 2003? Can they still find a cultural space? To quote Baudelaire: ‘Dandyism appears, above all, in periods of transition’. In a strange way, the dandy’s time may have come around again. In the vacuum created by technology shift, will dandies stake out their bespoke territory? As pure rebellion and an antidote to a world chockablock with designer labels and global branding?

It’s never been easier for styles to be referenced and copied overnight. Acts of fashion protest and exhibitionism can now be so easily assimilated or hijacked. Today’s dandy is tomorrow’s mainstream. But dandyism is alive and kicking. Or is it? Take a trip to Brighton and see what you think.