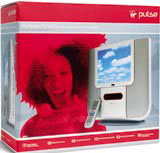 The Virgin Pulse range will be available through the 22 Virgin Megastores in the US and throughout the 1200-strong Target retail chain on an exclusive basis for the first six months of the roll-out.

Start managing director Mike Curtis says Virgin Pulse’s ‘friendly’ styling will challenge the ‘blandness’ of many of its competitors.

‘The products have a distinctive character to them,’ he says. ‘It’s the lack of character between Sony, Panasonic and JVC that’s making the market seem fairly commoditised to consumers.’

The Virgin brand is ‘still intrinsically linked’ with music in the minds of US consumers, particularly among younger shoppers, Curtis adds.

‘It’s a bit more rock and roll and premium [in its appeal] than it is over here, where it’s seen as more of a value brand,’ he says.

The consultancy won the work early last year on the strength of previous work for the Virgin brand.