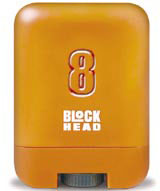 But while Hiom encourages driving home health and safety messages, she falls short of calling for re-branding of sunscreens from cosmetic to ‘preventative health’ goods – a move that would make creams cheaper by unburdening them of VAT.

‘Sunscreens are the one concession youngsters make in the sun,’ she says. ‘They refuse to sit in the shade or wear hats, but they will use sunscreen because they feel it’ll make them look beautiful, so [packaging] needs [to retain] that cosmetic element.’

Beard also criticises a tendency among designers to fall back on seaside-oriented graphics, claiming it reinforces the British misconception that sun protection is only required on the beach. ‘The palm tree thing ignores the reality that you also need sunscreen while skiing and on the street,’ he says.

Meanwhile, sunscreen brand Piz Buin took an ‘ethical’ stance by dispensing with varying gradations of brown on its packaging according to protection strength, in favour of one corporate shade.

‘The old system was problematic because it could have been seen as suggesting that the darker brown packages contained products that were for people who wanted to bake in the sun,’ concedes Robert Moberly, managing director of Lewis Moberly, which updated the brand’s packaging last year.

The Helen Hamlyn Research Centre has also called for on-pack health messages to be made more digestible. But the centre’s co-director Jeremy Myerson says that while designers and brand managers have a role to play in ‘ethical’ sunscreen packaging, the onus is not exclusively their’s.

‘We must beware of making designers responsible for peoples’ lifestyle choices,’ he warns. ‘If you lie in the sun for 12 hours, even wearing cream, you’ll burn. That has to be the individual’s call.’

A recent ICM research reveals 50 per cent of people use no sun protection at all or are reluctant to purchase sunscreen above factor eight for fear that they will not get a fashionable tan.

But chemist chain Lloyds Pharmacy last week claimed that a policy of clearing shelves of sunscreens below factor 15 had not negatively impacted sales.

Job hunters need to face the reality of recruitment