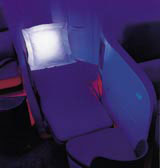 It will take more than dungarees and a chainsaw to lift your airline above an already packed market. But when Sir Richard Branson – dressed as Eminem – opened a product launch by attacking a polystyrene replica of a British Airways seat, he was firing off the latest shot in the battle for the highly competitive luxury travel market.

The launch in question was for the latest incarnation of Virgin Atlantic’s Upper Class seat. The new seat, designed by Pearson Lloyd and the airline’s in-house design team and developed over a three-year period, will cost £50m to install (DW 17 July). In addition the airline has invested in an on-board interiors overhaul by Softroom and DHA.

But Virgin’s investment in luxury flies in the face of current thinking within the sector. Earlier this month, Eurostar announced it was canning its luxury-class interiors by Phillipe Starck to focus on economy services (DW 10 July). And across the board airlines are turning to budget price messages to woo customers.

So does luxury travel have a future and if so what form will it take? And what challenges do designers working in the sector face as they try to tempt recession-minded consumers to spoil themselves with a taste of luxury?

Virgin Atlantic head of design Joe Ferry maintains that business travel has a future and predicts it will continue to rise, but admits that first class is likely to be a victim of an on-going focus on value for money.

‘Business travel requires such a high standard of product now that it doesn’t justify the additional expense of first class.’

Brand Environment creative director Joseph Mitchell agrees. The group designed interiors for Go and is currently working on start-up airline Duo (DW 10 July). Although low-cost airlines have become a permanent feature of the travel market Mitchell thinks the budget carriers might not have it their own way for much longer.

Mitchell says, ‘People are becoming a bit dissatisfied with the low-cost airlines because, from a business perspective, they’re not really flexible. There is a need for something between luxury and no frills. Passengers are dissatisfied with no frills, but they also know they can get low prices so they want something in between.’

According to Mitchell, delivering a personal touch is key to the future of business class.

‘It’s a solitary experience when you fly business class and there’s a greater need for more personal one-to-one service rather than an anonymous club class,’ he says.

‘The key to the future of business travel is all about choice, being able to have a say in how your flight experience happens. Good quality, but not too fussy. That’s how we’ve looked at Duo. Everybody’s space needs are different,’ Mitchell explains.

Roundel’s Tony Howard confirms that space is a major issue. The group worked on the Nighttrain design for Eurostar – not used in the UK, but sold to Canada – and the high-quality double-deck Kowloon to Canton railway, which runs between Hong Kong and China.

‘The most important thing [at the luxury end] is personal space because public transport is still just that, public,’ says Howard. ‘When you don’t have the luxury of privacy there will always be a case where people will buy extra space for themselves.’

‘The [airline] industry generally tries to compete on price, loyalty schemes and miles. The result is rational relationships and transient audiences,’ he says.

Crabb cites US domestic carrier Jetblue as an example of a successful ‘luxury’ travel brand.

‘In an airline market with well-documented problems, it has been incredibly successful, showing profit quarter on quarter. That’s based on the brand experience and quality, not price. People will pay for that,’ he maintains.

And for some companies investment in superior product remains a competitive necessity. As Ferry points out, Virgin Atlantic’s Upper Class product remains its best bet in winning competition from its larger competitors.

‘We’ve only got 30 aircraft so our fleet can’t compare with BA’s. But when you want to get from A to B and both airlines offer the same way of getting you there, then it’s how you get there [that makes the difference],’ he says.

Good design can only be experienced, not taught