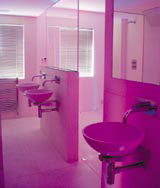 So what’s the home of the future going to look like? Robotic vacuum cleaners, voice-controlled washing machines, control panels that regulate the temperature of your bath?

While all this consumerist wizardry sounds wacky and innovative, it also feels paradoxically like incredibly hard work. Imagine coming home late after a day in the office, having to talk ‘loud and clear’ to your fridge and shooing away your puppy-like vacuum cleaner. Frankly, it would give me a headache.

Ultimately what we all want from an environment is to wind down and relax. This is why the Vos Pad, located in London’s Chelsea Harbour, sounds such a good idea. It markets itself as the world’s first apartment to be lit entirely by RGB colour-changing LEDs, all of which are fully dimmable with complete chromatic control.

As any lighting designer worth their salt will tell you, the human mind reacts to light in extraordinary ways, so an accurate choice of colours can make you feel cool when it’s sweltering, relaxed when you’re exhausted.

The level and colour of the lights are regulated by a Lutron custom-built computerised system that also controls the other technological features of the pad, such as the blinds, the integrated Opus home entertainment system with plasma TV, and the LCD TV screens fitted into the kitchen and the bathroom walls.

The Vos Pad has also been used for companies to place their products, like Electrolux’s Trilobite and an LED-illuminated spa bath from the Bathroom Discount Centre. My favourite was the fully programmable Roland KR-17 digital grand piano which – spookily – plays tunes as if an invisible hand was moving across the keyboard.

All the fittings are essential and minimalist, as required in contemporary urban dwellings. The pad is the brainchild of designer Marcel Jean Vos, who aims to apply this ‘blueprint for future living’ to working, living and entertainment spaces.

The Vos Pad is on sale at £750 000, and it’s undeniable that the light technology and some extra kit has helped push up the property’s price. Indeed, the company has already bought another flat next door to kit out.

A practical option would be to sell this concept to clients such as luxury hotels, which would then still be able to charge the full rate for a dull room without a view. But the Vos Pad is also about using light to improve life quality. A more charitable idea is to promote the system into hospitals, where studies have shown that good use of light can aid the patient’s wellbeing. Importantly, it’s also a sustainable option, since a good quality LED produces ten times more light than the common incandescent light bulb and has a life span that spans from 50 to 100 000 hours.

When I visited the Vos Pad, it was during the blazing heat wave that engulfed London last week, perhaps not the best of times to notice all the nuances of colour changing LEDS. Entering from a blinding midday light, my eyes took a while to adjust to the kaleidoscopic omnipresent bulbs (they’re in the bathtub, in the cracks behind the doors, between cupboard doors). Yet the final effect is stupefying and when I exited the flat, even sun-kissed Chelsea looked dull and lifeless.

Brief, and that’s the point

Office in a Bucket

Floats for this year’s Pride in the Park

Identity for Centre for Rail Skills