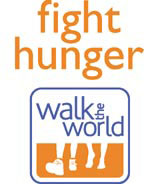 The World Food Programme, the world’s largest humanitarian aid agency and the UN’s logistics arm, is relaunching with a refreshed visual identity created by Design Bridge.

The new-look identity made its debut at last weekend’s Walk the World Event, and is expected to roll out across the organisation’s entire portfolio. ‘We are reviewing it for additional use,’ confirms a WFP spokeswoman.

The ‘content’ of the logo – a stylised hand grasping an ear of corn and stalks of grain and rice – is unchanged, according to Design Bridge corporate and service branding managing director Sophie Seveno.

‘We’ve changed the hand slightly, as well as the different elements in the hand. It needed to be simplified so it would be more recognisable,’ she explains.

The revamp comes as the WFP looks to raise its profile in the corporate sector. ‘Times have changed, and we can’t rely on Government donations any more. We’ve turned to corporate donors and we’re really trying to get our name out there,’ says the spokeswoman.

The organisation also found that its marque was virtually unreadable when reduced and paired with the logo for Walk the World, also developed by Design Bridge.

Global Walk the World co-ordinator Robert de Boer says Design Bridge was tasked with creating a ‘global’ identity for the initiative that fits in with TPG’s corporate culture and ‘said Walk the World’.

The identity’s applications include Walk the World stationery, banners and start and finish lines, promotional items such as T-shirts and caps, and a website, www.walk-the-world.com.

Design Bridge won the rebranding project, worth a five-figure fee, on the back of its existing relationship with TPG.

COI Communications faces up to the charges