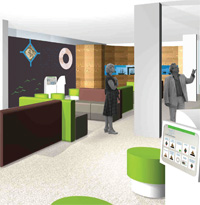 The National Maritime Museum has appointed Kin Design to create an interactive lounge that will link the museum’s archive to the wider world through the new Sammy Ofer Wing, set to open in July.

Kin was invited to tender with up to five other consultancies, according to consultancy partner Matt Wade, who says Kin came through two stages of pitching to win the contract in December 2010. Wade says, ’The main purpose is to communicate the relevance and extent of archival material, without competing with the other gallery exhibitions. All our content is virtual.’

Kin’s main concept uses a visitor-activated paper card with barcode and embossed stamp. The textural stamp is marked on the handheld key card as visitors select and interact with exhibits, pooling information that can then be accessed through a ’pod’ in the interactive lounge, or online after they have left.

’You could be looking at, say, a medal, and scanning the card might tell you who made it and who it was given to. It will be good for research,’ says Wade, who is also designing the interface for a dedicated site where visitors can input a code from their keycard.

The lounge will also house a Kin-designed interactive plan chest, which on first inspection appears to be a cabinet for maps, but opening a drawer reveals an interface communicating where the archive is being accessed from across the globe and what people are looking at in real time.

’It will show who’s looking at what online and give a sense of global relevance, with hotspots on the map showing up as pins,’ says Wade.

A lounge centrepiece consisting of five screens will be brought together to create what Wade is calling ’a sea of content’, which will appear as an approaching horizon of images, navigated by a globe track ball.

High-resolution images of sub-sets of the archive including flags, uniforms and ships can be accessed through the screen installation, which Wade says, together with the other pieces, ’shows the NMMs wealth of history and connection with the world’.

The Sammy Ofer Wing, designed by Purcell Miller Tritton, will open in July with branding by Someone and further exhibition design by Light Surgeons, which is working in the new Real Studios-designed Voyagers Gallery on a 3D sculptural audio-visual installation.

Meanwhile, details are emerging about a United Visual Artists-designed exhibition High Arctic, which will be installed in a new 800m2 special exhibitions gallery within the Sammy Ofer Wing. It is the result of a Cape Farewell project – a programme which brings together scientists and artists to explore climate change tipping points in the field. The party visited the Svalbard archipelago in Norway, and UVA is designing a responsive environment that will harnesses light and sound.