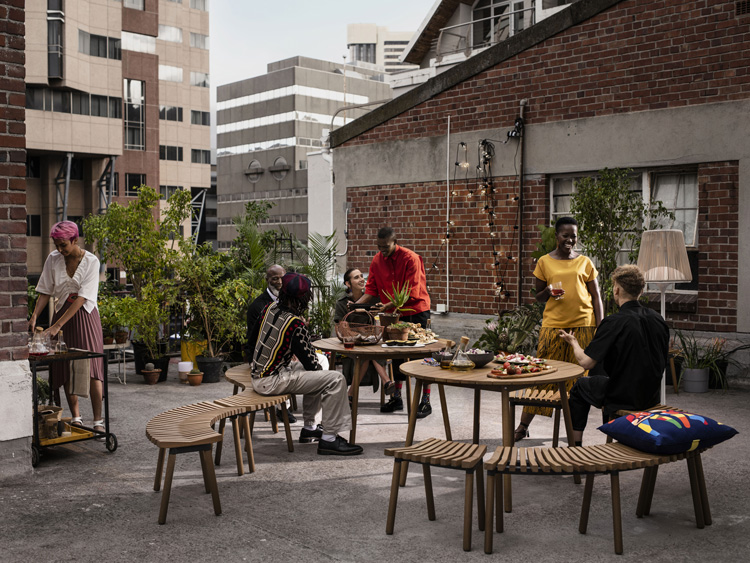 Ikea has unveiled its first African collection, which will be sold globally and is the result of a series of collaborations with 10 African designers, architects, artists and creatives.

The project was hatched at South African design conference Design Indaba 2016 and the results have now been unveiled at the 2019 event.

Based around urban ritual and play, the limited-edition Överallt collection will be released in May, in territories including Morocco and Egypt, as the start of a global roll-out.

Ikea creative leader James Futcher says the collection is a “palette of socialising tools”, which will encourage people to share stories, spend time with one another and be creative.

One of the predicted creative uses is customisation, best demonstrated through a chair designed by Issa Diabaté, which he hopes people will “make their own” by painting them and “even replacing pieces”.

Diabaté is the co-founder of Koffi & Diabaté architectural practice and his work is primarily concerned with addressing economic and social issues, so he wanted to make something that was affordable, functional and adaptable, he says.

“It is also low to the ground so it encourages you to relax and converse,” adds Diabaté.

Retailing at £42, it requires no glue, nails, or screws, is made from untreated plywood and has been designed in collaboration with Ikea designer Kevin Gouriou.

All of the African and Swedish designers were introduced to the material processes at a factory floor level to understand the manufacturing that would be required to mass-produce their designs.

However, most of the collaborative work was done remotely, with designers working from their home countries, which include Ivory Coast, Senegal and South Africa alongside their Swedish counterparts who they communicated with online.

Sindhiso Kumhalo, who is based in London and Cape Town, teamed up with Renée Rossouw, also based in Cape Town, and worked on textiles which became a quilt project.

Kumhalo says that when they collaborated with their Ikea counterpart, Johanna Jelinek, they worked hard “not to water down” the South African feel of the product.

“We needed it to look bespoke enough for people to want to keep it for a long time and to share with family members.

“This gives it a deliberate sustainability benefit, which is helped by the fact that it’s not a fast-fashion seasonable object.”

Studio Propolis — which is Naeem Biviji and Bethan Rayner — worked on a bench, stool and set of cooking utensils and ceramics designed to age with time and also become personalised with time.

“Products become more beautiful as they age, such as the bench and table, which are designed to wear knocks well,” says Biviji. “Also, the unglazed ceramics and cast iron pot — which can be used in many different ways — will pick up a patina over time. If you leave your mark on objects like this, you’re less likely to throw them away.”

Their primary function is to “bring people together in an intimate or public dining experience” and to encourage the ritual of communal meals and the act of sharing, he adds.

Other highlights include baskets inspired by hair braiding designed by Selly Raby Kane, from Dakar, Senegal, and a sustainable bag designed by Hend Riad and Mariam Hazem, a female duo from Cairo, Egypt, who have created a textile which comprises a silvery thread made from recycled chocolate bar and sweet wrappers.

6 things designers should know about copyright